Martin O'Malley Faces Test To Qualify For Next Democratic Debate

Former Maryland Gov. Martin O’Malley faces a polling test in the next week in order to make the next Democratic primary debate on Jan. 17, under qualifications announced Friday by NBC, the hosting network.

NBC is requiring candidates to average at least 5% nationally, or in one of the early states of Iowa, New Hampshire, and South Carolina, in order to participate in the debate. O’Malley, who has participated in the first Democratic debates, is currently polling at 6.3% in the RealClearPolitics average of polls in Iowa. He doesn’t yet meet that threshold in New Hampshire, where he is polling at about 2.3%, South Carolina, where he sits at 2.5%, or nationally, where he averages about 3.5%.

If he failed to meet the qualifications, it would be just the latest snub for O’Malley, who has complained that the Democratic National Committee limited the field to just six debates, a sum he believes was reached to shield front runner Hillary Clinton from additional contests.
Clinton would now only face insurgent Vermont Sen Bernie Sanders on stage, in the final debate before the Iowa Caucuses.

O’Malley’s campaign did not immediately respond to a request for comment. In an interview Wednesday, Vice President Joe Biden appeared to leave O’Malley out when discussing the state of the Democratic race. “We’ve got two good candidates,” Biden said, before praising the “robust debate” within the party.

Correction: The original version of this story incorrectly described Martin O’Malley’s standing in the polls. He is currently eligible to participate in the coming NBC Democratic debate. 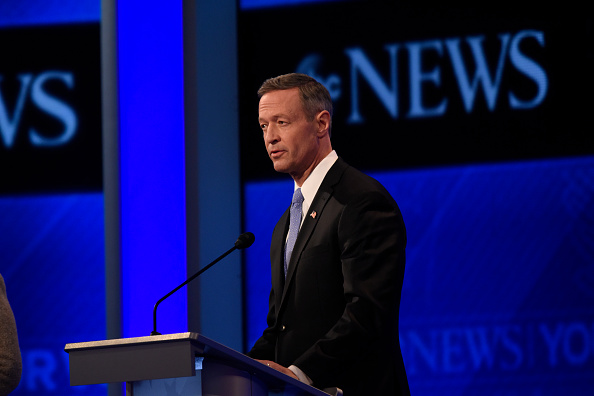 O'Malley May Faces Test to Get on Democratic Debate Stage
Next Up: Editor's Pick