Ted Cruz listens to a question during a campaign event in Webster City, IO on Jan. 7, 2016.
Jae C. Hong—AP
Ideas
By Elise Jordan
Jordan is a TIME columnist, an NBC News/MSNBC political analyst and a co-host of the Words Matter podcast.

Birther movements in American political life are base, mean-spirited and a distraction from the real issues at stake in a critical presidential election. And I couldn’t be happier that Ted Cruz is getting his moment in the birther sun.

I believe in karma. As a reward for Cruz’s self-serving and cynical defense of the worst of Donald Trump, the billionaire bully has launched a birther movement to attack the Canadian-born Cruz as he rises at the polls.

Trump now wants a federal court to determine if Cruz, born in Calgary to an American mother, satisfies the “natural born” requirement to serve as president. Though most constitutional scholars interpret this undefined clause in Cruz’s favor, uncertainty is all Trump needs to plow ahead in the court of public opinion.

For any other candidate, this scrutiny would be unfair, and it was wrong for Trump to call into question President Barack Obama’s U.S. citizenship. But unlike other contenders for the 2016 Republican nomination, Cruz enthusiastically cross-pollinated with Trump and rose in his defense, even claiming that Hillary Clinton, not the Donald, started the fervor over Obama’s birth certificate.

Until now, being Trump’s lackey has been a smart strategy for Cruz: every other candidate who has attacked Trump has, as the Donald loves to brag, precipitously fallen at the polls. (Full disclosure: until the end of 2015, I was an advisor on Senator Rand Paul’s campaign and supported Paul’s decision to aggressively attack Trump’s bullying.) As the primary plodded on this fall and candidates who took on Trump—such as Paul and former Florida Governor Jeb Bush—did so to their peril, Cruz’s Machiavellian allegiance to Trump was maddening.

Cruz’s defense of Donald has been his only consistent position, and until now it was galling that it worked.

Consider his policy positions and track record in the Senate.

Cruz has approached his duties in the U.S. Senate with the zeal of a government bureaucrat determined to play obstructionist politics even against his own party. (Bonus points, Cruz, if you really did wear a diaper for your pointless 21 hour filibuster against Obamacare — you are the jilted astronaut stalker of this cycle.)

Because of his calculating intelligence, Cruz could just as easily be a conventional establishment Republican—as he was in his work on President George W. Bush’s campaign and for his administration—instead of the Tea Party firebrand we see today. That’s why he is scary — because he who stands for nothing only stands for himself.

The malleability is apparent in his ever-changing or non-existent policy positions — notably, how he opposed the National Security Agency’s warrantless spying until he voted for the Patriot Act. How over the course of a few months, he went from declaring his support for granting Obama “fast-track” trade authority to suddenly opposing the secrecy of an always-secret deal. Just this week in Iowa, Cruz decided that ethanol was a really good thing, disavowing his previous calls to end ethanol subsidies. Political office even changed Cruz’s tone on his former “dear friend” Chief Justice John Roberts. In 2005 Cruz wrote publicly in support of Roberts and heralded the judge as a “role model” for his staff in the Texas Solicitor’s General Office; in 2015 Cruz called for his resignation from the Supreme Court.

It’s a long shot, granted, but there’s a chance I might like Ted Cruz — if only I knew what he stood for.

Who is the guy? The politician who advocates “carpet-bombing” civilians — or the man who reads Green Eggs and Ham to his little girls? The candidate who, during his Senate campaign, attacked the Dallas mayor — a fellow opponent of same-sex marriage — for attending the city’s gay pride parade, or the fundraising politician who assures a New York City audience that ending gay marriage wouldn’t be a priority? Is he an attorney who supports federal stimulus dollars when he’s billing by the hour, or the deficit hawk claiming “there’s a battle over whether we remain a free market nation”?

Maybe, just maybe, this national political nightmare on the eve of the Iowa primary will force Ted Cruz to define what he truly believes in before Iowans head to caucus.

Or maybe he’ll finally reap the rewards of his cynical, shape-shifting strategy. 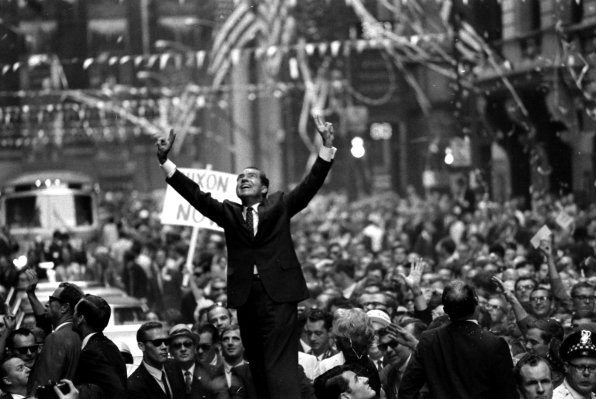 How Richard Nixon Owned the Campaign Trail
Next Up: Editor's Pick