Former Forest Supervisor: Why I Resigned Over a Public Land Dispute

Dwayne Ehmer carries an American flag as he rides his horse on the Malheur National Wildlife Refuge near Burns, Ore., on Jan. 7, 2016.
Justin Sullivan—Getty Images
Ideas
By Gloria Flora
Gloria Flora is the Executive Director of Sustainable Obtainable Solutions, an organization ensuring the sustainability of public lands.

Once again, a provocative armed display of dissatisfaction with a federal land management agency is unfolding—this time, at a remote wildlife refuge in southern Oregon. It’s been happening since 1848, when Mexico ceded the southwest quadrant of the United States after losing the Mexican-American War. Early settlers were primarily Mormons and Confederate Civil War refugees, both fiercely anti-federal government. Those attitudes haven’t changed much.

In the late 1990’s, when I served as Forest Supervisor of the Humboldt-Toiyabe National Forest in Nevada and eastern California, the simmering anti-federal government animosities boiled over dangerously multiple times but failed to garner much notice. Now, we’re seeing a similar boil-over in Oregon. The Nevada-based protestors, despite confusion over history and the exact purpose of their one-sided stand-off, are demanding privatization, to give the land back to “the people.” It sounds compelling, but it’s invented history.

The federal government created the Malheur National Wildlife Refuge, the focus of this standoff, by usurping the Native American Pauite Nation’s homeland, then, years later, aggregating their abandoned reservation and a used-up cattle ranch bought at a premium during the Depression. The Malheur occupation today sounds a battle-cry of frustration from unwanted proxies who believe they speak for the people of Harney County. Clearly, the interlopers have their facts wrong. But their hair-trigger reaction to a situation reminiscent of their grievances deserves a closer look.

The heart of the matter is that the human dimensions of managing public lands are just as important as the physical and biological dimensions. We Americans love our landscapes. Those who spend a lifetime on the land, like ranchers, connect with it even more deeply. That attachment, our sense of place, is part of our identities. The mythos of the West, with its freedom of the open range, may not be entirely accurate, but it’s written in our cultural DNA and value systems. When you threaten someone’s land ethic, values and lifestyle, you’re in for a fight.

Nevada has a preponderance of public lands, mostly managed by the Bureau of Land Management. Feds there have sparred with a small, loud cohort of rural citizens for decades. These self-described patriots have used bulldozers to “open” roads (often destroying spawning habitat, river channels and artifacts in their wake) and bombed federal property, offices and an employee’s home. The renegades, which include elected officials, have treated federal employees and their families to threats (and actual) bodily injury and property damage, thrown them out of restaurants and hotels, and submitted them to harassment, shunning and public shaming. I resigned to call national attention to this violence against employees and public lands, which only temporarily slowed them down.

Much of Nevada and conservative parts of Western states look on in amusement. Fed-bashing remains a popular spectator sport in these parts. But armed stand-offs by wanna-be revolutionaries and their flagrant refusal to pay for their commercial use of public lands isn’t winning many hearts and minds. Nor is the seldom-publicized violence these people commit against employees of the U.S. Forest Service and Bureau of Land Management, an average of 214 incidents every year for the past 20 years. Far more go unreported out of fear of retribution.

Indeed there are plenty of cringe-worthy federal missteps: a mash-up of under-reactions, over-reactions and egotism. Flashy, strong-arm displays by U.S. law enforcement haven’t worked; it doesn’t matter that they’re legally right. Arrogance on the part of any federal land manager or agent is inexcusable. But laws or consequences of breaking them can’t be ignored repeatedly by public servants sworn to uphold them.

Then there are the majority of Americans in the middle, who expect federal laws to be enforced, protecting public land from abuse and theft while sustainably, scientifically managing them for current and future generations. Come hell or high water.

The term “cowboy welfare” didn’t materialize out of thin air. Grazing allotments on public land are privileges, not rights, subsidized by fees 93% cheaper than private pasture in the West. Many small and mid-sized ranching operations can’t pencil out if they are not using subsidized grazing on public lands.

That’s an extremely stressful realization and a symptom of artificially controlled markets, corporate mergers of meat-packers (there are only four in the U.S.) and a globalized economic system that no longer rewards American values of pluck and boot-straps. It’s not the fault of environmentalists, East Coast liberals or a federal agency. There are larger forces at work here. Fighting symptoms does not cure the disease.

Policies crafted without heart or wisdom can add to this difficult conundrum. Robotic implementation of those rules further aggravates the grievances and tensions. Respectfully seeking to understand these stressors and their effects on communities and agencies is an essential first step, because things aren’t getting any easier.

A flagging economy, bedeviled by drought, floods and wildfires, puts us all on thin ice. Community members, including federal employees, need to help each other in new and deeper ways because the external support systems can no longer maintain the our collective safety and prosperity nor can they sustainably manage our public lands for future generations, let alone ours.

The rise of forest collaboratives and citizen-lead legislation over the past decade offers bright rays of hope. We all want meaningful jobs and relationships, economic stability and resilient, productive landscapes. People from all sides of public-land issues, if they choose to, can repair relationships so that they can work toward those common goals. As a result of collaboration, we’ve seen the demise of timber wars allowing increased forest restoration and jobs in small towns throughout the West. And federal land managers are responding positively, despite the impacts of falling budgets and rising wildfire costs.

There are 25 forest collaboratives in Oregon alone, including one in Harney County. Ranchers, conservationists, hunters and foresters across America can and do work together for the collective good. For example, those are the folks behind the citizen-generated Rocky Mountain Front Heritage Act, focused on preserving 350,000 public acres in Montana as a haven for wildlife and recreation, a draw for jobs and economic security for communities, and a place for grazing for ranches that have operated there for more than 100 years. The Act helps fight weeds and secures more than 67,000 acres of new wilderness on lands already managed for their wilderness qualities, adding the first new wilderness acres in Montana in 31 years. It took seven years and endless one-on-one conversations but emerged with solid citizen backing, 80 supporting organizations and bi-partisan support. Despite profound differences, all sides came together for the common good.

I left a remarkable career and my retirement on the table to try to end this divisiveness. Of all people, you’d think I’d be the first to call for the hammer to come down on this fringe element. But that won’t protect public lands or promote civility in public land management. So let’s put down the guns and handbooks, exchanging vitriol for honest cooperation and common sense. Our finite public resources are under siege by natural, economic and global forces bigger than Bundy’s boys. That demands the best stewardship we can muster—collectively.

Correction: The original version of this story misstated the federal agency that manages the most public land in Nevada. It is the Bureau of Land Management. 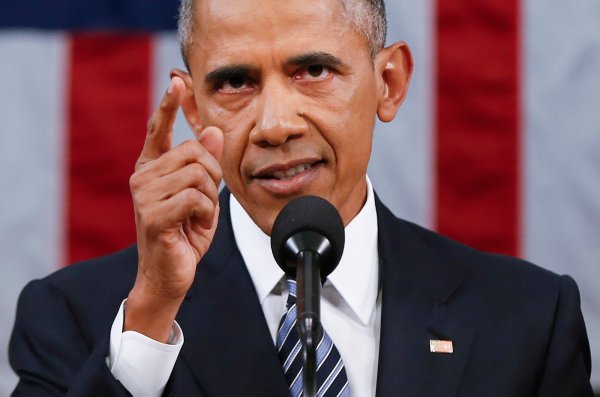 Why Obama Wants to Be America's Dad
Next Up: Editor's Pick