The E.U. Has Called for an Investigation Into the Missing Hong Kong Booksellers

Members of student group Scholarism hold up placards during a protest about the disappearances of booksellers outside China's liaison office in Hong Kong, China January 6, 2016.
Bobby Yip—REUTERS
By Nash Jenkins

The European Union is calling for an investigation into the recent disappearance of five individuals connected to a Hong Kong–based publisher of books critical of China. Two of the missing persons are citizens of E.U. member states.

In a statement released on Thursday, the E.U.’s diplomatic agency described the case as “extremely worrying,” and decried the “continuing lack of information about the well-being and whereabouts” of the missing owners and staff of Mighty Current Media, which is notorious for its salacious texts on top mainland Chinese officials and business figures.

The prevailing suspicion in Hong Kong is that the men have been detained by Chinese authorities. A co-owner of Mighty Current Media, naturalized Swedish citizen Gui Minhai, failed to return from a holiday in Thailand last October. It is widely speculated that the other co-owner, British citizen Paul Lee, otherwise known as Lee Bo, was snatched from Hong Kong by mainland police, who, if that was the case, would have been flagrantly exceeding their jurisdiction and violating the territory’s autonomy.

“As Hong Kong Chief Executive C.Y. Leung has stated, it would be a violation of [Hong Kong’s constitution] if, as media allege, mainland law enforcement agencies had been operating in Hong Kong,” the statement reads.

Continued alarm over the fate of the booksellers comes amid news that the government-run Radio Television Hong Kong (RTHK) has sacked two presenters who were prominent in last year’s Umbrella Revolution. Both Chan Ka-ming and Shiu Ka-chun say they were told to either downplay or refrain from mentioning the 79-day pro-democracy street occupations, according to the South China Morning Post.

RTHK strongly denies any political motivation in the dismissal of the presenters, but the timing of their discharge — coming alongside Lee’s alleged abduction and the news that a popular chain of bookstores has pulled from their shelves works that would be banned in China — has only fueled fears that Hong Kong’s constitution, known as the Basic Law, is failing to maintain the autonomy of Hong Kong, which was a British colony until 1997.

Under Hong Kong law, citizens enjoy a litany of freedoms that mainland Chinese do not — such as freedom of speech, under which may fall the right to publish sensational books about the sex lives of Communist Party chiefs. But when thousands of Hong Kongers took to the streets during last year’s Umbrella Revolution, they did so acting on “a broader perception that Hong Kong’s rule of law has been undermined,” Michael Davis, an expert in Hong Kong and Chinese law at the University of Hong Kong, told TIME on Wednesday. 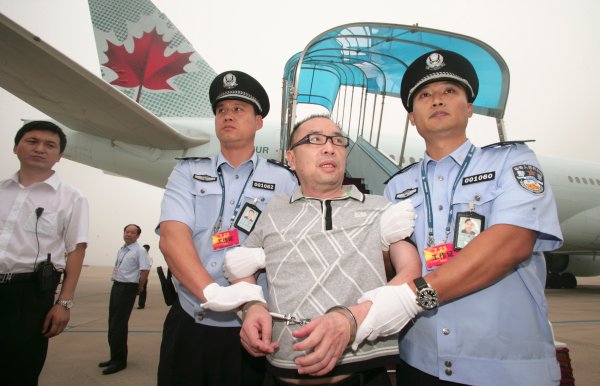 The Long Arm of Chinese Law
Next Up: Editor's Pick