Bush Makes the Case That Trump Is Not Conservative

For months, Bush has cast Trump’s bombast as disqualifying, his bluster dangerous and his foreign policy a folly. Now, Bush is going another route, arguing that Trump is insufficiently conservative and, maybe, a closet Democrat.

“If people think Donald Trump is a conservative, prove it to me. I mean, really,” Bush said during a town hall in the iconic town hall in Peterborough, New Hampshire.

“He gives money to the Clinton Foundation. He thinks Hillary Clinton would be a great negotiator with Iran. He gave money to her campaign. Until recently, he was a Democrat. He supported Bill Clinton when he ran for President,” Bush said. Every charge is true, although Trump says he regrets those moves that took place before he decided to run for President himself.

An animated Bush seemed to be enjoying himself, letting lose on the research his campaign put in his briefings. “Can you trust Donald Trump to actually be a conservative? I don’t think so,” Bush said in a made-for-TV conclusion. “I think the conservative cause is worth fighting for.”

It makes sense that Bush would know this. Trump’s primacy in the GOP primary has been in place for months, and Bush has a mind for specifics.

But it was a slight twist of the screw for Bush. He had long make the case that Trump was simply too unpredictable for voters to risk, and his temperament would put the United States in danger. The pivot to domestic policy-based specifics about Trump is coming as time is running out for voters to derail his march to the nomination.

The Trump rift is likely to come up during Q&A with voters, and is not yet part of his standard campaign speech, aides said. Aides were visibly pleased that their boss finally has started this line of criticism.

“A conservative party should nominate a conservative candidate, not someone who has been all over the map,” Bush said.

For Bush, it’s a bet that New Hampshire’s flinty voters will side with serious over circus within the next month. “You take it seriously. You ask the right questions. You make the discerning decisions,” said Bush, who still badly trails Trump in national and early-state polls. “I have enough confidence in the voters of New Hampshire to make the right decision.”

Read Next: Republicans Fight to Be the Not-Trump in New Hampshire 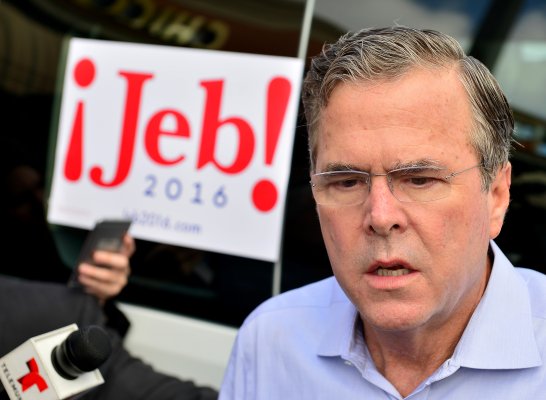