Two-year cell phone contracts are officially dying. T-Mobile dumped them years ago, then Verizon followed suit late last year. With AT&T set to get rid of contracts on Friday and Sprint planning to do the same, they’ve been phased out almost entirely.

Going forward, phone buyers will be expected to purchase their devices outright, either by paying in a lump sum or through monthly installments. Here, we break down exactly how these new plans differ from the old way of buying phones.

Those “free” phones were never actually free. Many people are used to picking up a new phone every two years for free or at a heavily discounted price. However, the high cost of these devices was often baked into your wireless bill in the form of high monthly access fees. Many carriers are now slashing that fee and charging a separate monthly fee for the actual cost of the phone.

A cheaper phone means a cheaper monthly bill. With the cost of the phone now separate from the access fee, price-conscious customers can lower their bill by picking cheaper phones. For example: Verizon is offering Samsung’s Galaxy S6 for $19.83 per month ($476 total) on its website right now. That’s nearly $200 less than Apple’s iPhone 6s.

Holding onto the same phone could dramatically reduce your bill. The best way to save money with the new plans is to hold onto your phone for a longer period of time. Once a device is paid off, typically over the course of two years, the device charge is removed from your monthly bill. For most high-end smartphones, that would be a savings of $20 to $30 per month. In the two-year-contract days, carriers didn’t lower your phone bill even if you didn’t upgrade to a newer device.

With this advice in mind, here’s a look at the specifics of what each carrier offers in 2016:

Verizon has simplified its plan offerings — it now sells data in “buckets” that can be shared by up to 10 devices. Prices range from $30 per month for 1GB of data to $100 per month for 18GB. Each phone on the plan has an access fee that costs an additional $20 per month. Customers can choose between buying a phone upfront, or paying for it over 24 monthly installments. If customers want to leave Verizon before the 24-month period is over, they must pay any remaining balance.

Customers who want to keep their old plans with two-year contracts can do so and keep getting free or subsidized phones. However, once you switch from a contract plan to monthly device payments, you can’t go back.

AT&T’s data charges range from $30 per month for 2GB to $375 for 50GB for up to 10 devices. There’s also a $25 per month access fee for each phone. The price of of the phone can be paid upfront, or through a monthly installment program called AT&T Next. Unlike Verizon’s plan, AT&T Next has an upgrade component to it.

Customers who want to cancel AT&T have to pay the balance of their remaining monthly installments in a lump sum.

T-Mobile eliminated two-year contracts long before the other carriers. It now has the most options for monthly installment plans. The access fee for smartphones is $50 for the first line, $30 for the second line and $10 for additional lines, with each line coming with 2GB of data. Additional data can be bought for individual lines in sets of 4GB for $15 each. This is different from the other carriers, which sell data in buckets that can be used by lots of different people on the same plan.

As with the other carriers, buying a phone outright is an option. Customers can also pay for their phone over 24 monthly installments, like Verizon.

T-Mobile also has two different phone upgrade programs. Jump! costs an extra $10 per month and lets customers upgrade to any new phone as long as they’ve paid at least half the price of their old phone in monthly installments. The program also includes device insurance. Frequent upgraders should also consider Jump! On Demand, which lets customers upgrade up to three times a year without having to pay an additional fee. Still, Jump! On Demand only includes a limited variety of phones. Both upgrade plans require customers to trade in their old phones to T-Mobile.

Sprint said last year that it would phase out traditional two-year contracts by the end of 2015, but for now the company is still offering them. We’ll focus on the newer plan options here.

For phones not on a two-year contract, the access fee per phone line is $20 per month. Users can then buy buckets of data that can be shared among 10 devices for prices ranging from $20 per month for 1GB to $225 for 60GB.

Customers can sign up for Sprint’s leasing program, which means about two years of monthly payments that add up to less than the full price of the phone. At the end of the lease period, customers can either buy the phone outright by paying the balance of the price or upgrade to a new phone.

Like the other carriers, Sprint also has a more straightforward monthly installment payment plan that divides the price of the phone across 24 months. And similar T-Mobile’s Jump! plan, there’s a Sprint offering called Early Upgrade which lets customers upgrade to a new phone after a year by paying $10 extra per month. Customers can also buy their phones outright right off the bat.

A growing number of manufacturers are selling “unlocked” phones—devices that can easily be used among the four major wireless carriers—directly from their websites or stores through payment plans. Apple’s iPhone Upgrade Program lets customers get a new iPhone every 12 months, along with two years of the company’s insurance program, for $32.41 per month for the basic model. Motorola also offers monthly payment plans for many of its unlocked Android phones on its website. But unlike carriers, the manufacturer uses a credit program that is subject to high interest rates if payments aren’t made on time. 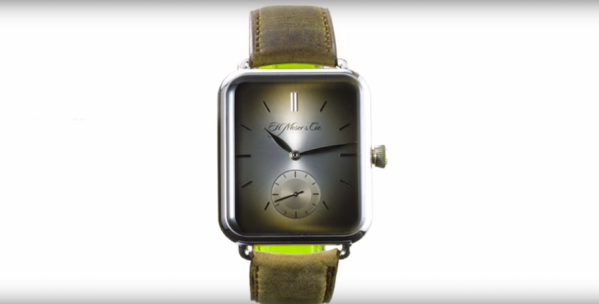 This New Luxury Watch Looks Just Like the Apple Watch, And it Costs Nearly $25,000
Next Up: Editor's Pick