Review: Tharsis Is an Ingenious Space Game That Will Break You

Tharsis, a turn-based space strategy game for PC and PlayStation 4 by the folks who gave us the quirky Bit.Trip series, will probably break you. It nearly broke me.

Not because its blackly comic 10-round death march to Mars doesn’t work. There’s just no margin for error. I’m not exaggerating for effect. I mean literally zero. I can count the number of games that took me this long to figure out on one finger, and then only after playing Tharsis.

So far, I’ve made it to Mars twice. That’s out of 30 games that took about 20 minutes a piece. My spaceship – it looks like 2001: A Space Odyssey‘s baton-like Discovery One – pulls into orbit, then jettisons its command module, which promptly explodes. That’s not supposed to happen. But Choice Provisions’ throws one last wrinkle at players who manage to crawl bloodied and cursing to the finish line, a perverse closing hurdle that pops up like a sadistic anti-deus ex machina with a knife twisting Nelson-from-The-Simpsons “Ha ha!”

It’s just the sort of game Tharsis is. Let me cushion all this difficulty scaremongering by stating that the game is completable. I know another critic who’s done it, and by god, I plan to someday myself. But let me also say that just making it to Mars orbit or figuring out how to routinely clear 1,000 points per game feels like winning Olympic gold.

Tharsis looks like a dice-driven board game, where the board is the ship split into eight modules sporting names like “greenhouse” or “medical bay” or “operations,” each corresponding to a special ability. You maneuver four astronauts with their own unique talents between modules, repairing damage from deleterious random “events” that occur every turn.

You have 10 turns total, each equaling one week of real time. The astronauts have up to five standard die they can roll after they’ve committed to a module. But scoring high is only half the battle: random hazards that deplete crew health, freeze their rolls or vaporize dice entirely lie in wait like interstellar hobgoblins.

Say you’re playing as the doctor, trying to repair meteoroid damage to the “operations” module that will obliterate the ship’s final two points of integrity if left untended (it’s game over if ship health drops to 0). And let’s say the event requires you to drum up 14 points in dice rolls to do so. You have four dice at this point – the game automatically subtracts one per turn – and the hazards are loss of one health if you roll a 5, or stasis lock (no re-rolling) if you produce a 1 or 2. You pull the trigger and roll a 2, a 5, another 5 and a 6. Not bad! But the hazard means one of the 5s instantly saps your health (let’s say you had 3 health points, you’d be down to 2 – if you had 1, you’d be dead!).

You can re-roll once, but this is a good roll, and you have at least two more options we need to talk about. Since you’re the doctor, your special ability (on a roll of 5 or more) lets you add one health back. Or since you’re in the maintenance module, you can drop one of the 5s into a box that will reduce your “stress” level, feeding into another critical aspect of the game that happens between turns.

Too much dice talk? Tharsis may not be for you, because it’s a game of chance and wager glommed onto another game about mental mapping and resource allocation and research investment, all guided by handfuls of either bone white or bloody red dice. Literally bloody, the stuff dribbling and pooling as the dice tumble across the throw floor. Did I mention there’s cannibalism?

In that sense it’s not really about saving a crew en route to Mars from barrages of micrometeoroids or health-zapping modular infernos. Instead, it’s more like the zero sum game real astronauts play, where entropy throws curve balls and a single whiff can be lethal. It reminded me of the increasingly crazed events in Neal Stephenson’s Seveneves, where the moon explodes and humanity has to survive in a mishap-plagued orbital ark, staggering from catastrophe to catastrophe. Every scenario in Tharsis feels like that.

Speaking of, let’s finish our example. Remember the 14 repair points? You could easily knock those out with your 6 and both 5s, but that leaves you just 2, which you can’t re-roll (it’s locked in stasis!), relegating it to research if there’s a spot open (research lets you save up dice to trigger bonuses that could be something little, like conjuring an “assist” to forestall a future hazard, or something big, like adding 3 points to ship integrity).

You could alternatively shave a little off those 14 points, say just the 6, then use the two 5s to fill your personal ability (add health) or module (reduce stress) buckets, then have another crewmate pop over to chisel away at the remaining 8. Or let’s imagine a slightly different scenario, where the ship has a few more integrity points: You could just let the event play out and take the damage, because the benefits of doing other things (health replenishment, stress reduction, research investment) are greater.

“What’s really the best thing to do?” is the circle you have to square, because it’s the “obvious” threat only half the time.

Tharsis asks you to make decisions like this up to four times per turn, once for each crew member. Then it shuffles you over to a “choices” interlude, where you can use accumulated food to buy more dice, or in the later turns, if food’s scarce, chow on dead crewmates. Or if there’s no one left to eat, just kill someone!

Trouble is, killing crewmates (as well as triggering hazards during dice rolls) increases stress, and that way lies madness. Let stress levels run high, and instead of helpfully benign choices between rounds, say “Would you like to trade one ship point for one health point?” you might be offered a huge pile of dice or health, but only if you butcher a compadre.

If you like brutally exacting clockwork games with appalling dilemmas, you’ll adore Tharsis. As Keith Burgun put it in a terrific piece on clockwork design for Gamasutra, “Decision-making is actually a pretty special thing – it only happens when a person understands the system enough to do something better than just make a blind guess, but also doesn’t understand it so well that they basically just have the solution.”

There’s plenty of blind guessing or flat misguided thinking you’ll have to pour into Tharsis before you’re making studied wagers or educated maneuvers. Like I said, there’s no margin for error, and the number of potential scenarios is all but infinite. And yes, as Burgun notes in his essay, a clockwork game is not a puzzle designed to be “solved.”

But break a clockwork game like Tharsis down to its constituent choices and it’s entirely puzzle-like. There’s always a best solution, the goal posts just move each time you do, the puzzle reconfiguring as the variables realign, the harrowing, enthralling, maddening path forking and re-forking until the end. 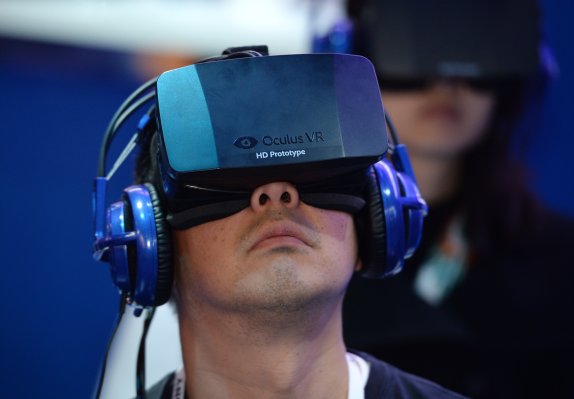 Here's What Computer You'll Need to Use Virtual Reality
Next Up: Editor's Pick