Police walk past missing-person notices for Gui Minhai, left, among five missing booksellers from the Mighty Current publishing house, and Yau Wentian, a Hong Kong publisher who was jailed for 10 years in 2015 while preparing to release a book critical of Chinese President Xi Jinping, posted on top of the sign of China's Liaison Office in Hong Kong on Jan. 3, 2016.
Anthony Wallace—AFP/Getty Images
By Nash Jenkins / Hong Kong

Causeway Bay is Hong Kong’s busiest, brashest retail district — think gilded Gucci storefronts, perfume clouds, and many, many mainland Chinese tourists — but Causeway Bay Books is tucked into a second-floor corner of a dingy building that also houses a pharmacist and a beauty salon called Person Nail. The narrow stairwell up from Lockhart Road is lined with printouts that will give you a good idea of the bookstore’s wares: the faces of Chinese President Xi Jinping and Mao Zedong feature prominently, though at least two advertisements are for Antoine de Saint-Exupéry’s Le Petit Prince.

Causeway Bay Books is also popular with mainland tourists, because many of the books it sells — tabloid tomes with lurid subject matter such as the sex lives of top Chinese Communist Party officials — are illegal north of the border that separates Hong Kong from China. But on Wednesday afternoon, the shop’s door had been bolted shut. There is nobody left to run it.

Five of the company’s employees have disappeared. A sixth employee told BBC correspondent Rupert Wingfield-Hayes that he was afraid he would vanish next.

The most recent disappearance was of the 65-year-old co-owner, a British man known as Paul Lee or Lee Bo, who was last seen at the company’s warehouse in Hong Kong on Dec. 30. (Four others, one of them a Swedish national, went missing while traveling overseas in October.) Lee called his wife Sophie Choi to tell her he was “assisting” an unspecified police investigation across the border in Shenzhen; Choi would later realize that his mainland travel permit, which Hong Kong residents must produce when crossing the border, was still at home. There is thus no official record of Lee leaving the city.

“If you put two and two together, he could have only been abducted,” Willy Lam, a legal scholar at the Chinese University of Hong Kong, tells TIME. “In recent interviews, Lee said he hadn’t been to the mainland for two or three years [because of fears for] his safety. I doubt he changed his mind.”

Lam says that snatching a person in Hong Kong would be an easy task for mainland Chinese police, whose vehicles, he says, “can come and go across the border without stopping at border control.”

He also told local radio Thursday that he knew of “at least” two other Hong Kong publishers of works on China who had been intimidated by mainland agents. The revelations came amid news that mainstream Hong Kong bookstores were starting to pull from shelves works that mainland authorities would find objectionable.

Earlier this week, Chinese Foreign Minister Wang Yi advised against “groundless speculation” over the recent disappearances, but claimed — at a joint press conference with British Foreign Secretary Philip Hammond — that Lee was, in spite of his British passport, “first and foremost a Chinese citizen.”

Lee’s disappearance has heightened old anxieties in Hong Kong about the specter of Chinese authority, the exercise of which over the Special Administrative Region (SAR) is putatively limited by a constitution known as the Basic Law.

“If Lee was kidnapped off the streets of Hong Kong, it would clearly violate the Basic Law,” Michael Davis, an expert in Hong Kong and Chinese law at the University of Hong Kong, tells TIME. “It would show a disregard for the separation of the Chinese and Hong Kong legal systems, which the constitution guarantees.”

The distinction between the two political realms — one a free-market metropolis increasingly defined by the cosmopolitan traditions and freedoms that are part of its colonial heritage; the other the world’s only communist superpower — has also been the subject of heated dialogue and street protest here in recent years. In September 2014, thousands of Hong Kongers took to the streets of their city for a 79-day demonstration in favor of democratic reforms to the local election system, which many see as designed to serve Beijing’s interests.

“The 2014 protests were not just about democracy, but about a broader perception that Hong Kong’s rule of law has been undermined,” Davis says. “For many Hong Kong people, this is the greatest concern. Beijing takes such wide liberties that you sometimes worry they don’t understand how the rule of law is meant to work.”

This sentiment was echoed by 19-year-old activist Joshua Wong, the bespectacled poster boy of the 2014 demonstrations who on Wednesday led a small but vocal protest at the Liaison Office of the Central People’s Government.

“It’s really a battle between Hong Kongers and mainland interference,” Wong told TIME following the rally. “This is proof that Hong Kong is not Hong Kong anymore. [Lee] is an innocent bookseller — even if his books discussed sensitive topics, what about our freedom of speech?” 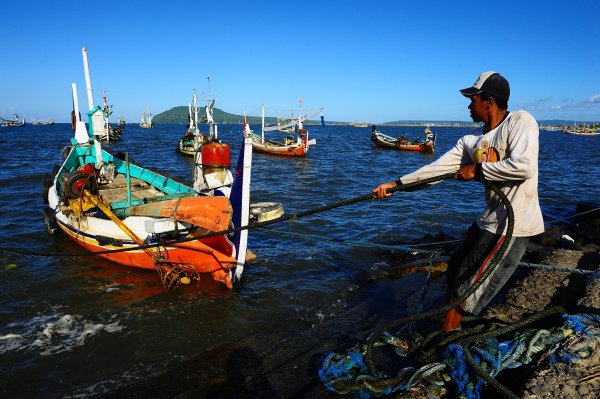 Shark Fishermen Feel the Pinch
Next Up: Editor's Pick