When it comes to immigration reform, Bernie Sanders has checked all the boxes for a Democratic presidential candidate. The Vermont Senator supports a path to citizenship. He would protect the vast majority of undocumented immigrants from deportation. He’d abolish most detention centers and allow the undocumented to buy health insurance through the Affordable Care Act.

Nevertheless, the liberal senator has drawn approval from some unlikely quarters.

Roy Beck, the president of NumbersUSA, a group that seeks to dramatically reduce legal and illegal immigration to the United States, said this week that after studying Sanders’ record and rhetoric, he sees some common ground.

“I admire Bernie’s passion and I notice that his immigration position is closer to mine than it is some of the presidential candidates on the Republican side,” King said in an interview with an Iowa radio station over this past summer. “He’s said ‘Let’s take care of American workers.’ I’m all for that.”

Also this summer, King compared Sanders with Republican candidate Donald Trump, saying they’re “both speaking with non-politically correct language, and Bernie has taken some positions that I agree with. And part of his immigration policy is something that I agree with.”

To be sure, Sanders differs from conservative boosters like Beck and King on most counts. Sanders has long supported a path to citizenship and called for better treatment of undocumented immigrants. (NumbersUSA has given Sanders an “F-” grade on immigration policy.)

But the praise is not accidental. Sanders’ opposition to the 2007 immigration reform bill and his rhetoric about the effect of immigrant labor on American workers have dismayed immigration activists and liberal allies in the past. He has expressed concern repeatedly over the years that guest workers in the United States depress wages and squeeze Americans out of their jobs.

Sanders opposed comprehensive immigration reform in 2007 on the grounds that it would expand the number of guest workers in the United States. It included a measure that would allow 200,000 guest workers to stay in the country for two years on temporary visas. The bill was widely supported by immigrant rights groups and would have put the undocumented on a path to citizenship.

“If poverty is increasing and if wages are going down, I don’t know why we need millions of people to be coming into this country as guest workers who will work for lower wages than American workers and drive waged down even lower than they are now,” Sanders said in a television interview in June 2007.

Joining Sanders in opposing the 2007 bill was the AFL-CIO, the largest coalition of labor unions in the country—as well as staunchly conservative members of Congress like King and advocates like Beck.

“The reality is employers hire desperate aliens who will work for much less than Americans, driving wages down and making it impossible for American workers to compete,” King said in May 2007.

Sanders’ past positions reflect a peculiar and tenuous agreement between the far right and the far left on immigration. Both Tea Party conservatives and many labor activists argue that immigration can depress wages and squeeze Americans out of work, particularly when immigrants are undocumented immigrants or come through low-skilled guest worker programs.

The unlikely groups are not exactly allies. King, for example, has outraged the left with inflammatory remarks, once saying that some immigrants have “calves the size of cantaloupes” from carrying marijuana across the desert. He has often compared illegal immigrants to animals. When he called for an electrified border wall in 2006, King said it would discourage immigrants from “fooling around.” “We do that with livestock all the time,” he said. (King was not available for comment.)

But labor unions have often been at the forefront of opposing temporary work visas, arguing that guest workers push low-skilled American workers out of their jobs. Sanders has followed the unions, with whom he is closely allied.

Immigration activists have taken note of Sanders’ votes and his rhetoric.

Sanders has “pitted immigrants as an obstacle to tackling unemployment on a number of occasions,” said Alida Garcia, director of coalitions and policy at the pro-immigrant group FWD.us. “He’s evolved on this issue since his campaign launched, but where his prior statements have been troublesome is within his economic framework of welcoming new immigrants to our country.”

Javier Valdes, co-executive director at Make The Road New York, another immigrants advocacy group, also said Sanders was on the wrong side of the 2007 bill. “We were upset that he did not push for it at that time,” Valdes said. “I think he now understands the weight of that vote. The consequences resulted in millions of people being torn apart in largest deportation program this country has ever seen… [But] Sanders’ views on immigration have evolved over the years.”

Sanders ultimately voted for the 2013 comprehensive immigration reform legislation along with ever other Democrat in the Senate, but was still opposed to guest worker program for low-skilled workers, saying it could lower wages for American workers.

Sanders’ policy advisor, Warren Gunnels, said that Sanders objected to the poor treatment of guest workers when they arrive in the United States. “It was not just about American workers. It was about the extreme abuse that guest workers were facing in this country,” Gunnels said, explaining opposition to the 2007 bill. “He did not believe we should have massive expansion of temporary guest worker programs that did not have any proper protections for those guest workers.”

The Vermont Senator has faced scrutiny throughout the campaign for his votes in earlier years. He supported an amendment with Sen. Chuck Grassley in 2009 that would have prohibited banks that received federal bail-out funds from hiring guest workers. Sanders also supported an amendment in 2005 that would have eliminated 50,000 permanent resident visas annually to people from countries with low immigration to the United States.

He eventually voted for the 2013 comprehensive immigration reform bill, but not without qualms over the guest worker program—using the kind of rhetoric those on the right might approve of.

“It does not make a lot of sense to me to bring hundreds of thousands of those workers into this country to work for minimum wage and compete with Americans kids,” Sanders said in 2013.

But in his current campaign for president, Sanders has been unequivocally in favor of a path to citizenship for undocumented immigrants, and he has spoken passionately on protecting families from deportation. Many immigration activists note that Sanders’ plan is more detailed than Hillary Clinton’s.

“It is time to bring our neighbors out of the shadows. It is time to give them legal status,” Sanders said last year in Nevada, in what has become a common refrain for the Vermont senator on the campaign trail. “We are a nation of immigrants… Hard working families coming to the United States to create a brighter future for their children.” 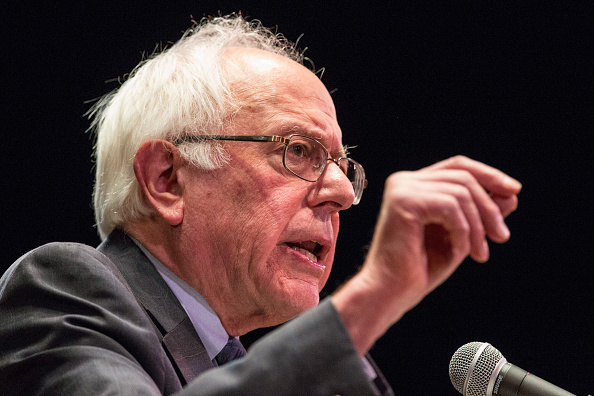