Republicans Fight to Be the Not-Trump in New Hampshire

Donald Trump can have his poll lead. The real race in New Hampshire, at the moment, is a fight to be the Not-Trump.

Former Florida Gov. Jeb Bush, New Jersey Gov. Chris Christie, Florida Sen. Marco Rubio and Texas Sen. Ted Cruz are clustered together in the polls. The quartet of skilled campaigners is increasingly sharp with their attacks, jockeying for advantage over the other.

Meantime, Ohio Gov. John Kasich is hanging back, hoping that feud will leave them all damaged and give him enough time to continue his slow rise.

In close quarters, the Not-Trumps are sparring on their records and temperament, their vision for the country and their ability to defeat likely Democratic nominee Hillary Clinton. In New Hampshire, these arguments are repeated almost hourly as the campaign hits its final sprint ahead of the state’s Feb. 9 primary.

“He signed anti-gun legislation,” Bush said of Christie. Christie fired back in a Fox News interview: “Does he think people on the terrorist watch list should be able to purchase guns? I do not.” Rubio is telling voters that Cruz is naive in his plans to carpet bomb ISIS and make the sands there glow in the dark: “Talk is cheap, though, because that stuff costs money. You can’t carpet bomb if you don’t have an Air Force and if you don’t have bombs.” And Cruz rumbled through Iowa on a marathon bus tour, his spokesman mocked Rubio’s shoe choices: “A vote for Marco Rubio is a vote for men’s high-heeled booties.”

And that’s not to mention the millions of dollars in television ads from the candidates and their friends at the super PAC that are unavoidable on New Hampshire airwaves.

The fight comes as voters are starting to pay attention to the race, and, as is typical in New Hampshire, remarkably few have made a final decision about who will get their support. It’s making for a messy last month of campaigning after almost a year of remarkable détente.

The sparring is hardly unusual. Campaigns always turn brutal toward their ends. What stands out this year is the candid assessment among campaign managers and advisers, pollsters and aides that the target at this hour in New Hampshire isn’t the frontrunner. “Nothing we can do will take him out, so why waste our time on something that can’t do what it?” says one senior adviser to a hopeful. “When we talk about this race, we have to deal with Donald Trump separately,” says a peer in another campaign.

So that leaves Trump, the brash billionaire, to enjoy his place atop the pile of Republicans for the moment. His rivals are betting—praying, really—that voters will get serious and bring Trump’s polling advantage back to reality. “There is going to be a sobriety that kicks and people are going to take it seriously,” Bush said Tuesday night in Meredith, New Hampshire. “Our political system works.”

In a separate interview with the Washington Post, Bush said the race at this moment is against the Not-Trumps, not Trump himself. “Look, Trump’s the frontrunner and there’s a jump ball for second with five candidates, and that will be sorted out over the next few weeks,” he said.

That’s not to say Trump is getting a free pass from those who are chasing him in the polls. “We’re serious times and we need a serious candidate,” Bush said. “We’ve got a lot of yappers. We have a lot of talkers. People are really good at it.” Others are stepping up their Trump swipes, while Trump continues to mock and insult them. It’s a very good bet that The Donald will not be getting invites to cocktails after the next GOP debate, scheduled for next week in South Carolina.

None of this is improvised. The Not-Trump campaigns have their polling histories at hand. Leading in polls at this moment, a month before New Hampshire, is more often than not a liability. Leads are tough to defend, voters are fickle and New Hampshire’s voters are notoriously cranky Yankees. The challenge for those snapping at Trump’s heels will be to find a way to score an uptick in the polls and time it precisely. They don’t even need to defeat Trump, which might be impossible.

They just need to be one of the two or three chief Not-Trump candidates leaving New Hampshire. And the competition for the role is starting to get tougher. 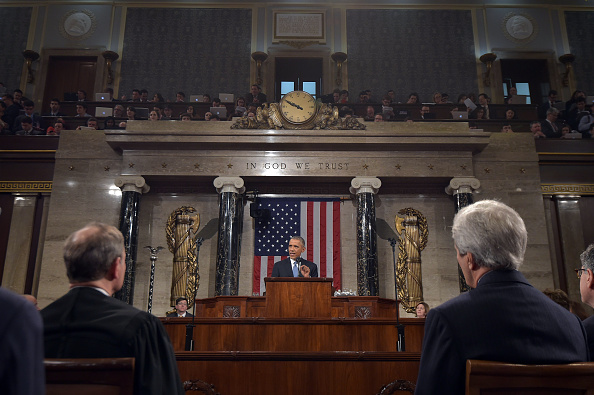 President Obama Releases Trailer Previewing His Last State of the Union
Next Up: Editor's Pick