The next time you see a message that urges you to get cancer screening because it “saves lives,” you might want to consider this.

In an analysis published in the BMJ, researchers say that there has never been the proper, solid scientific evidence to prove that screening for most common cancers, including breast and prostate cancers, can save lives.

At the same time, the scientists say they don’t believe that screening is a complete waste of time. Confused? So are many doctors and cancer experts.

What Dr. Vinay Prasad, assistant professor of medicine at Oregon Health and Science University, and his colleagues argue is that the advice to get screened is based on some serious assumptions that likely, but not certainly, can save lives. That’s because most of the studies that look at screening and its effects have been focused on specific diseases: breast cancer, for example, or prostate or colon cancer. Researchers compare people who get screened regularly (about yearly beginning in middle age) to those who don’t, and figure out their rates of dying from the disease. In these studies, screening shows benefits in avoiding early death from these diseases. What they don’t do is show how people who get screened fare when it comes to dying from any cause compared to people who don’t get screened.

That’s important, argues Prasad, since screening itself can lead to situations where people are put at risk of other complications or conditions that could also prove fatal. Early treatments for prostate cancer, for example, included hormonal therapies that raised the risk of dying from heart disease, so while men who underwent screening and found positive lesions and received treatment might not have died of prostate cancer, they might have died of a heart attack.

“I’m willing to admit that disease-specific mortality [from cancer] is a surrogate for whether cancer screening can save lives,” says Dr. Otis Brawley, chief medical officer for the American Cancer Society. “For most diseases, it’s a reasonable surrogate but not a perfect surrogate, so that’s a discussion we need to have.”

There’s also the fact that false positive test results may lead to treatments for cancers that never would have developed and caused harm, but resulted in side effects from radiation or surgery interventions.

“The idea that at least screening tests save lives is misleading and incorrect,” says Prasad.

MORE: Fewer Men Are Getting Prostate Cancer Blood Tests, And That May Not Be a Good Thing

Showing that cancer screening can lower the risk of death from any cause would require significantly larger numbers of people—10 times the average screening trial today—and longer and more expensive multibillion dollar trials. People would have to be followed until their natural deaths, and doing that for such a large population would be unwieldy and impractical. But Prasad argues that the cost and need are justified. “I like to contrast the amount that it would take for such a trial to the amount we spend annually as a society for cancer screening without knowing the answer to a fundamental question: do I live longer if I get screened? I think it’s shameful as a field that we haven’t set out to answer that question and give people the information they need to make informed choices about screening.”

Prasad isn’t alone. More cancer experts admit that it’s time to rethink screening—not whether it’s of any value at all, but to become smarter about which people are screened at what point in their lives. Studies show that with more screening, the rate of false positive results goes up anywhere from 25% or more, and because of these results, many people receive treatments that come with complications for lesions discovered by screening that may not actually need to be treated. Some cancers can be aggressive and need to be found early and treated so they don’t progress, but others may remain inert for the person’s lifetime. For now, screening detects them all and doesn’t distinguish among them. “We need to make sure the screening or treatment isn’t causing collateral damage,” says Robert Smith, vice president of cancer screening at the American Cancer Society. “While we applaud the fact that screening may reduce the risk of dying [of a cancer] by 30%, we need to make sure that we are not increasing the risk of dying by 30% due to the screening or treatment itself.”

MORE: The Cost of Chasing Cancer

While that may seem obvious, having the information to make such a decision hasn’t been available until recently. Back in the 1970s, when the War of Cancer began in earnest in the U.S., the priority was on educating the public about cancer risk and urging them to take action. Because cancer starts small and grows and spreads, making treatment more difficult, the premium was on detecting it early. So the public health message about cancer was to get screened and to get these tests done regularly.

MORE: Most Women Should Not Get Yearly Mammograms, Group Says

Smith agrees that it’s time to rethink screening and how it’s presented to the public. “There is no question that the public overestimates the value of screening,” he says. That’s in part due to the fact that as with any campaign to promote something—in this case, cancer screening—“the emphasis is on the upside and not the downside,” he says. “So yes, we do need to do a better job of not only communicating both the upside and the downside, but in making sure people really understand what that means.”

Acknowledging the harms of screening, as well as the benefits, will help both doctors and healthy people decide what screening they need and when. Everyone’s risk will be different, and everyone’s judgment about how much risk they are willing to accept will also vary, making blanket advice to simply screen everyone less acceptable in coming years. “We all want and wish for the perfect screening test that will allow us to go in, find something and do something and, as a result, help us live longer,” says Prasad. “We all want that. But the [cancer] screening tests haven’t proven themselves to be that yet. We hope we can get to that point, but we’re still not there yet.” 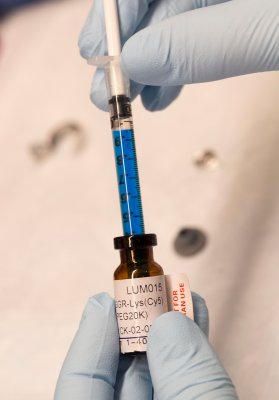 Researchers Find a Way to Light Up Cancer Cells
Next Up: Editor's Pick