Why Donald Trump Is Turning Against the Media

If this whole running for President thing doesn’t work out for Donald Trump, he is already showing skills as a media critic.

During a campaign rally Tuesday night, the Republican mogul repeatedly pointed to the journalists who traveled to rural Claremont, New Hampshire, to cover his rally. They’re stupid and biased liars, he said. They’re working to conceal Trump’s popularity and refuse to show the crowd sizes, he said. Oh, he added, and they have lousy vocabularies.

What’s not-so-subtly implied: the reporters are scheming not just against Trump, but also his supporters. It’s an easy foil for a candidate who has opted from bombast over specifics, insults over policy. And it might just keep him atop the polls.

Bashing journalists is a good bet for Republican primaries. There remains deep distrust among conservatives of mainstream media outlets, and perceived bias is highlighted and augmented on social media platforms. Trump, who was the most frequent guest on Sunday talk shows, as well as an omnipresent figure on cable news, has made his anti-media rants part of the act.

Not concerned about conflicting messages, Trump also points to dozens of news reports that back up his side of things. The new Reuters poll shows him up. CNBC suggested he would turnout the largest electorate ever. Fox News and CNN broke ratings history in debates that featured Trump. NBC’s Chuck Todd got a shout-out by name. The media is garbage, he suggests, but look at this thing they produced.

But what Trump fails to acknowledge is that he is a candidate of the media’s creation, a frequent guest on cable talk shows and a favorite topic for reporters who have for months been left unable to explain how a never-before-elected businessman has dominated a race over seasoned Governors and dynamic Senators. His events are frequently carried live on the cable networks and on their websites. His unpredictable nature makes good television and better ratings.

“Look at the red lights behind you. We have so much press. Every night, it’s like live television,” Trump said, letting himself imagine a rally where he wouldn’t be held to account for what was said. “Do you think I could make a speech without live television? Would I let lose. Would we have fun.”

For months, Trump has obsessed over polls, and he still does. He repeatedly quotes polls throughout his remarks, even starting his hour-long event on Tuesday with a polling update. But with Iowa coming on Feb. 1 and New Hampshire following on Feb. 9, he’s increasingly firing up his crowds—the biggest in the Republican Party—by bashing reporters and what they produce.

“Don’t believe these people. They’re bloodsuckers,” Trump said. “They give you such false reporting. It’s unbelievable how dishonest they are.” A point of contention for him is that cameras don’t pan his large crowds. “I always say, ‘Scan the room.’ They don’t do it,” Trump bemoaned. Instead, he says he has to tell his wife when he gets home about the crowd sizes because she can never tell when she watches on TV.

Trump has ridden to the top of the polls as he has leveled insults at Hispanics, Muslims, women and the disabled. Every passing invective has only helped him solidify his supporters, who, for the moment, like his in-your-face brand. “We can be nice and politically correct. But we don’t have the time anymore, folks,” Trump said.

To that end, he mockingly reacted in protest when supporters shouted a claim that President Obama is a Muslim and that Hillary Clinton was stuck in the bathroom. Earlier in the campaign, he took guff for not rejected those claims and now seems to be doing pro forma efforts to mock his critics.

“I didn’t say it,” Trump feigned shock when a man shouted about Obama’s faith. (Obama is Christian, although pockets of conservatives wrongly believe he is an adherent to Islam.) “I’m supposed to reprimand you,” Trump went on. “How dare you? I reprimanded him. Now the press cannot be angry.”

When a voter shouted about Clinton, who was tardy returning to stage after a break during the ABC News debate, the Republican repeated the insult in case the cameras hadn’t picked up on it. “That’s terrible. Terrible. You should never say that. They said she’s in the bathroom. I’m admonishing you, for the press,” he said.

At other points in Trump’s typically disjointed, stream-of-consciousness appearance, he returned to journalists. He said he alone is responsible for record-breaking audiences for debates. “They were boring. Who the hell watched them?” he said of non-Trump debates. Now, he chided, “they have the biggest ratings in cable history.”

And, just in case Trump’s audience didn’t get the point that he holds reporters in low regard, he challenged them on their education. “I have a better vocabulary than anybody on the dais,” sneered the Ivy League graduate. 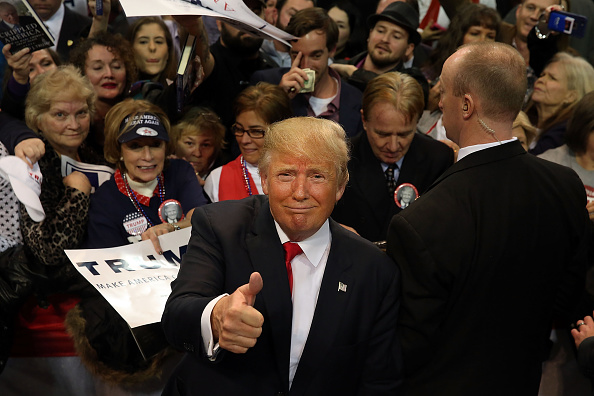