Bernie Sanders’ volunteers are often one step ahead of the campaign.

As the insurgent’s organization creakily geared up for action in Iowa and New Hampshire last year, thousands of volunteers already had set their sights on winning states like Tennessee and Massachusetts.

And they developed complex chains of conference calls and outreach groups before the campaign could set up offices for phone banks in Minnesota and Alabama.

Now Sanders volunteers have developed a smartphone app that allows canvassers to collect voter data door-to-door without any help from campaign staff.

The app, called Field the Bern, allows Sanders enthusiasts unaffiliated with the campaign to collect key voter data on their iPhones — effectively stand-ins for organizers with the more traditional clipboards. It’s unclear how much the app will help turn out voters, but it is a reflection of Sanders supporters’ impatience for the political revolution.

“Our generation is not going to be handed another FDR,” said Josh Smith, one of the lead developers on the app. “We’re not going to just be given the large-scale infrastructure change we need. We have to build it ourselves.”

The campaign has often lagged behind its own activists’ enthusiasm, struggling to catch up and build an infrastructure in states where volunteers are active. There are now 400,000 active volunteers working for the Sanders campaign, and many report to other volunteers rather than to staffers.

The app is the latest attempt to bridge volunteer efforts with the campaign’s turn-out-the-vote initiatives. Using their smartphones, volunteers can collect detailed data from voters, including names, addresses, party registration, their preference for Sanders, as well as emails and phone numbers.

The campaign is developing software that will allow that data to be incorporated into its own database, complementing the campaign’s other on-the-ground efforts. It has a potential to increase the amount of data Sanders has access to, and if it is widely and effectively used, could help the campaign turn out voters in Super Tuesday and later states. The day after its release, 1,000 users were on the app.

“We want to be able to take all the canvass results that they’re generating, review it as a campaign and import it into our field program,” Kenneth Pennington, digital director at the Sanders campaign, said of the app.

Users get points for knocking on doors and connecting with voters. It will be a challenge for the campaign to effectively use the data, however, and many field organizers will probably end up relying on the tried-and-true, traditional methods of clipboard data collection.

The volunteers that wrote the app’s code belong to groups including Coders for Sanders, Code Corps and FeelTheBern.org. The app is open source, meaning that any campaign with a coding team could create its own version of it and distribute to volunteers.

But the app’s developers were mainly motivated to create the app because they wanted to spread Sanders’ message, not as part of any specific campaign strategy. It reflects the spontaneous and loose organization of Sanders’ campaign, where activists’ idealism has more to do with making a movement than winning.

That’s a sentiment that comes from all the way at the top. “What this campaign is about is building a political movement which revitalizes American democracy, which brings millions of people together,” said Sanders on Tuesday at an event in New York. 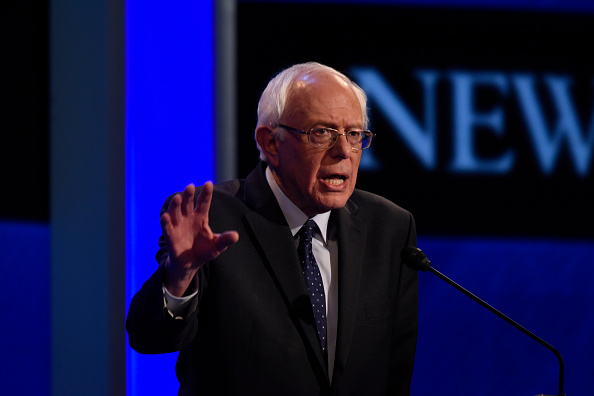