Vladimir Putin may inspire controversy (think back to the Sochi Olympics and gay athletes), but Russia’s leader also has, as of late, inspired his own cologne scent. Yes. For a mere $95, you can own “Leaders Number One.” In case you were wondering, he inspires aromas of lemon, fir cones, and black currant. The designer calls it a “natural” and not at all “aggressive” scent. This product got us thinking, what other Putin products are there? Well, a lot. But we wanted the best and most expensive ones. If you’re a fan of Russia’s leader, we found your next Christmas gift.

Why get a regular iPhone when you can get one with Putin’s gold profile encrusted on it? The $3,200 phone also features the country’s emblem and a verse from the national anthem. Created by Caviar, known for Russia-themed luxury remakes of Apple products, the phone is named the Caviar Ti Gold Supremo Putin Anniversario Edizione 63. It was released in time for Putin’s 63rd birthday in October 2015. Only 63 were sold, in fitting with the birthday theme. The phone comes with a velvet-lined wooden case and a $300 carrying case for those interested.

Caviar also made a gold Apple Watch with Putin’s signature emblazoned on the side. Named “Smart Watch Russophilic,” it was limited to 999 units and also features the outline of a panoramic view of Moscow. It retails at about $3,000, just like the phone.

Would you like Putin-themed jewelry to go with your Apple products? You’re in luck. Moscow-based brand Putinversteher makes rings with Putin’s face on them. Creepy? Slightly.

A less-luxury product, that still costs $76, is the 2016 Putin calendar. Show off your love for Putin to all your coworkers. It’s all you’ve ever wanted, and more.

Then there’s a cornocopia of Putin products featured on redbubble.com, such as shirts showing condoms wrapped in Putin’s face.

If you don’t want to spend any money on Putin products, you can still find some “Putinspiration” like this on Instagram. 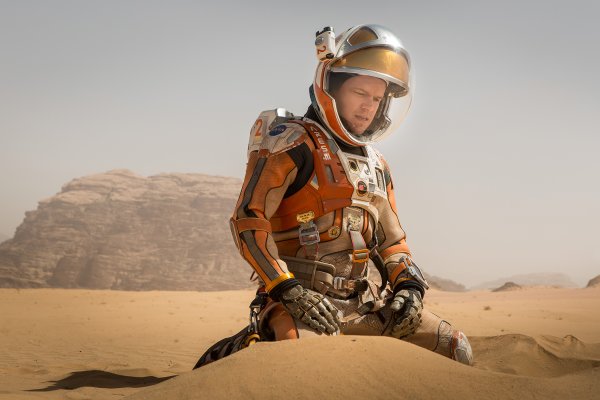 The Honest Trailer for The Martian Shows That It's Really Just Cast Away in Space
Next Up: Editor's Pick