Few things require more hands-on attention than a young child. And there’s little that’s more distracting than the constant bleeping of our cells phones. When these two things compete for our attention, the results can be sobering. In a new animal-based study published in the journal Translational Psychiatry, scientists show that distracted parental attention may sometimes have detrimental effects on babies’ development, especially their ability to process pleasure.

The study involved rats, but the implications, says one of the senior authors, could be very relevant for many parent-baby interactions in our technology-obsessed world.

Dr. Tallie Baram, professor of pediatrics and anatomy-neurobiology at University of California, Irvine, and her colleagues used a rat model to study how good but disrupted attention from mothers can affect their newborns. Baram placed some mothers and their pups in modified cages that did not have sufficient material for nesting or bedding. This was enough to distract the mothers into running around looking for better surroundings and end up giving their babies interrupted and unreliable attention. Baram and her team compared the development of newborns raised in this environment to those raised in the normal cages where mothers had enough material to create a comfortable home.

MORE: Millennials Are More Confident in Their Parenting than Others

When the offspring grew older, the researchers tested them on how much sugar solution they ate, and how they played with their peers, two measures of how much pleasure the animals were feeling and a proxy for their emotional development. The rats raised in the modified environments consistently ate less of the sugar solution and spent less of their time playing and chasing their peers than the rats raised in the normal setting.

“We were stunned,” says Baram. “We had to go back and look at what the heck we had done. What was it in the development of these baby rats, what aberrant signals did they get?” The rats had enough food, were raised in the right temperature, and were normal weight. What’s more, they spent the same amount of time with their mothers as the babies raised in the normal environments.

MORE: Are we overthinking parenting?

What differed among the rats growing up in the modified environments was the type of attention they received from their mothers. Their mothers, stressed by the lack of an adequate environment to raise their young, tended to be more unpredictable than mothers living in the proper environment. For example, rather than repeating grooming acts or postures that reassured their offspring, or indicated to them that it was time to eat or play with their peers, these mothers might be distracted into nervously looking around the cages to improve their surroundings.

The fact that the adolescent mice showed signs of compromised pleasure sensations suggests that just like with sensory systems such as sight and hearing, there may be a critical window in which newborns need to be exposed to certain behaviors from mom in order for their nervous system to develop properly. In this case, the lack of consistent, repetitive and reliable attention appeared to affect the animals’ ability to develop proper emotional connections to help them understand pleasure. “It makes perfect sense,” says Baram. “We do need rhythms and consistent exposure beyond the ears for them to be capable of discerning complex patterns in speech and music. We need patterns for the visual system to develop. I guess we need predictability and consistency for the emotional system to develop. Nobody looked at that before.”

That means that for people, there might be a similar critical time during which babies need to have a mom and dad’s reliable and consistent attention in order to form proper emotional processes. That includes knowing that at a certain time every day, for example, food will come, or that when a toy appears, mom will play. If mom is distracted by a call or a message alert, and turns to the cell phone instead, then this pattern gets broken and the crucial learning that should occur might not happen. Other studies have shown that such poor development of the pleasure system could contribute to mood disorders such as depression and anxiety.

“Predictability means we know that one behavior will follow reliably with a second behavior,” says Baram. “That seems to be engaging the pleasure system.”

Baram says that it’s unlikely that the mother’s stress alone from being in an inadequate environment was responsible for the changes seen in the adolescent rats. Other studies of rats in similar modified environments did not always result in offspring with altered pleasure processes.

MORE: Not Without My Smartphone: The Case for Somewhat Distracted Parenting

But to confirm that it’s the unpredictability of the attention that is crucial for emotional development, she and her colleagues are now turning their attention to human babies, and looking closely at mother-child interactions to determine whether differences in the consistency and patterns of the mother’s behavior affects their children. They plan to monitor the effects using brain imaging to look at potential differences in both the structure and function of certain brain regions.

“What we are proposing is that there is a sensitive period in which maternal care needs to provide consistent patterns and sequences of behavior so the baby’s brain can perceive them to develop normally emotionally. The predictability of maternal care seems to engage the pleasure system, and the pleasure system needs to be engaged so the neurons involved will fire together and then will wire together,” she says. 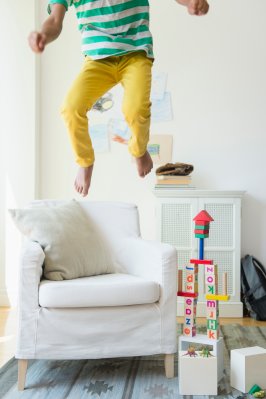 6 Questions to Ask Yourself Before Putting Your Kid on ADHD Medication
Next Up: Editor's Pick