Gun show managers interviewed this week were divided on the merits of President Obama’s new executive actions to close the so-called gun show loophole, which allows some gun sales to proceed without a mandatory background check.

Show managers and collectors echoed public disagreements over gun restrictions, with some calling Obama’s actions a long-overdue reform, and others arguing that the rules would restrict the rights of Americans without effectively reducing gun violence.

“I think that people are just so happy that something’s going to happen,” said Doug Roberts, 79, who is on the board of directors for the New York State Arms Collectors Association and sells firearms at gun shows. “There’s a lot of people that shouldn’t be selling who are selling.”

Daryl Klein, the 56-year-old manager of Trade Show Productions, which runs 14 gun shows per year in Iowa, disagreed. “What [Obama’s] doing is not, in my mind, going to affect gun violence in any way shape or form, but he will be restricting the rights of some law-abiding citizens,” Klein said.

The President’s actions expand the definition of which gun sales require a background check to more broadly include anyone in the business of selling firearms, which previously excluded people making “occasional sales, exchanges, or purchases of firearms for the enhancement of a personal collection or for a hobby” from having to perform background checks. The White House said the action still won’t include people buying and trading as collectors but will apply to people who represent themselves as dealers, sell firearms shortly after acquiring them, or sell firearms in their original packaging.

A primary motivation behind the President’s order is to extend background checks to gun shows, which give those who don’t necessarily make a career of selling firearms a chance to hawk their wares. Sandy Ackerman Klinger, president of the New York State Arms Collectors Association—which hosts the three largest gun shows in the state— said such a policy is hardly a revolutionary idea in some parts of the country. New York already requires background checks at gun shows, and she feels the restrictions have had no negative impact on business.

Roberts, a fellow New Yorker, said the regulations, while not a panacea for gun violence, are a step forward on the issue . “Even [Obama] said, ‘Hey, it’s not going to solve everything, but it might save some lives,’ and that’s wonderful,” he said, referring to the President’s emotional remarks on gun violence in a news conference on Tuesday.

Other gun show managers have either expressed more tepid support, or outright opposition to the new rules.

Emery Webster, who runs the Up in Arms Gun Shows in Wyoming, Montana and Idaho, also said he welcomes the changes, but feels gun shows have been unfairly targeted.

“More stringent background checks—I don’t think it’ll hurt anything,” said Webster, 70, before arguing that gun shows were not a key player in national gun violence. “That’s not to say there isn’t a gun show loophole, but I don’t think it’s exploited the way they say it is,” he said.

“I don’t know what [Obama’s] trying to do. There’s enough rules and regulations on the books right now to take care of what needs to be taken care of,” said Caraway, 58. “The gun shows ain’t the problem, and the gun stores ain’t the problem.”

Like many issues in the gun control debate, public opinion on background checks at gun shows defies simplification. An October Gallup poll showed 86% of Americans favored “a law which would require universal background checks for all gun purchases in the U.S. using a centralized database across all 50 states,” a policy that resembles Obama’s executive order. However, only 19% felt that such a background check law would do a great deal to help prevent mass shootings, a central focus of the President’s announcement, compared to 53% who felt it would do little or nothing at all.

Annette Elliott, the 52-year-old organizer of C&E Gun Shows in Virginia, West Virginia, Ohio and North Carolina, mirrors public ambivalence on the issue, saying that while she supports the new measures, she isn’t sure they’re necessary or superior to the current system. Instead, she believes the additional law enforcement and funding for mental health services will be the most significant improvements of the new executive actions.

“All the federal and local laws that apply do not disappear when you walk in a show, and you have all those extra eyes on you,” Elliott said. “There are a lot of law enforcement in these shows. It really isn’t going to affect anything,”

Klein, the Iowa gun show manager who opposes the executive actions, echoes her point. “I just think they need to enforce the laws that we already have out there,” he said. 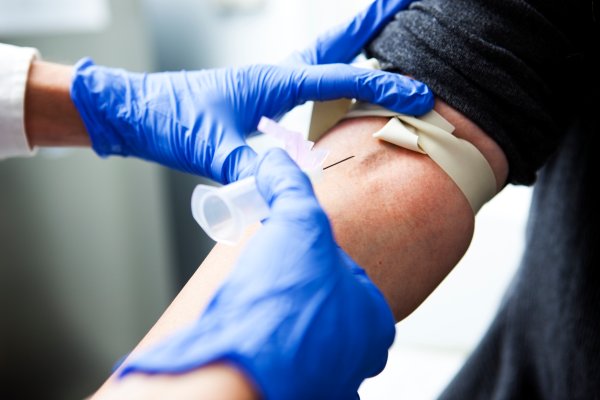 Gay Men Permitted to Give Blood ... Eventually
Next Up: Editor's Pick