In a movie, sometimes one face is everything. In Son of Saul, set in Auschwitz in 1944, Hungarian-born actor Géza Röhrig plays the Saul of the title, a member of the Sonderkommando, special groups of death-camp prisoners forced to dispose of the bodies of their own people—only, before long, to face extermination themselves. Saul is on duty when a boy, near miraculously, survives the gas chamber—the young man is quickly put to death by a camp doctor, and an autopsy is ordered, to determine what made him so tenacious.

Saul witnesses all of this—in fact, we’re with Saul every moment, so we’re at least brushed with an awareness of his surroundings—and becomes consumed with saving the boy from the knife and finding a rabbi to recite the Kaddish. In the context of the surrounding horrors, it’s a fool’s errand. But everything in Saul’s face—a haunted woodcut, painfully alive to everything around him—tells us that this small but highly risky gesture is imperative. It’s the last thing that can keep him human.

There’s no way to describe Son of Saul, winner of the Grand Prix in Cannes last year, without making it sound like one of those movies you know you ought to see but will find any excuse to avoid. But if it’s a demanding film, in the end it isn’t a despairing one. Son of Saul doesn’t give the audience anything so falsely comforting as a happy ending—how could it? But it treats suffering as a living, breathing entity, not just as a dramatist’s tool or a means of punishing an audience. Its director and co-writer, Hungarian filmmaker László Nemes (making his feature-film debut), isn’t just re-creating unspeakable sadness but electrifying it with a kind of somber energy. For all its intensity, Son of Saul is never ponderous. It moves so quickly, and relies so little on dialogue, that you need to race a little to keep up with it, and to keep your eyes open every second.

Still, you should brace yourself for the experience of watching it. Nemes keeps the camera moving almost constantly, focusing mostly on Saul’s face, though also quite often on his back—he wears a gray coat with an X marked on it, and there’s no way to avoid fixating on it. We follow along, seeing what he sees. Disturbingly blurry images often lurk just on the periphery: Human corpses still pink with life are dragged as if they were animal carcasses (camp officials refer to them as “pieces”), and the movie’s sound design is distressingly effective—the victims’ screams may be muted, but there’s no blocking them out.

That’s all the more reason to stick close to Saul, which is clearly the movie’s design. He’s our guide on this tour of Hell, but he’s a deeply humane one. It’s almost as if he’s trying to protect us, too. And though his mission is noble, there’s never any certainty that he’s doing the right thing. Even as he’s trying to preserve the boy’s soul, his fellow prisoners, knowing their own execution is imminent, plan an escape. His obsessive pursuit threatens the whole undertaking. At one point a colleague admonishes Saul, “You failed the living for the dead,” and he’s not wrong. Ambiguity swirls through the picture like flickering sparks around a fire. Saul is making the only possible choice, yet it may not be the right one. In the midst of the unspeakable, what does the “right” choice even mean?

Röhrig carries the weight of that uncertainty in his bony, rolling shoulders, and in the depths of his eyes. With only a few TV credits to his name, Röhrig isn’t an experienced actor. In fact, he’s a poet and a former kindergarten teacher, living in the Bronx. But that could be what makes the performance so magnetic. You never get the sense that Röhrig trying too hard—he has simply melted into the skin of the character, and his eyes, instead of being glazed and dead, throw off a bruised, guarded radiance. A title card at the beginning of Son of Saul tells us that members of the Sonderkommando were also referred to as “bearers of secrets.” Saul is bearing so many. Perhaps it lightens his load to share some with us. 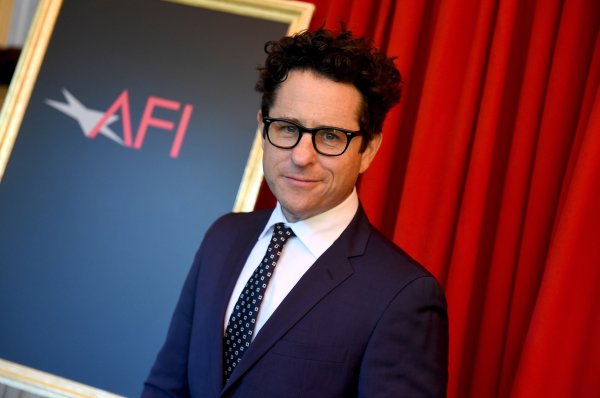 Here's What J.J. Abrams Has to Say to Star Wars Haters
Next Up: Editor's Pick