Why We Don't Call the Oregon Militia Members 'Terrorists'

Ammon Bundy(R), leader of a group of armed anti-government protesters speaks to the media as other members look on at the Malheur National Wildlife Refuge near Burns, Ore., on Jan. 4, 2016.
Rob Kerr—AFP/Getty Images
Ideas
By John McWhorter

In the wake of the standoff between the white armed protesters in Oregon and the authorities there, many have complained that these men are not being called terrorists. The idea is that we seem to apply the terrorist label more readily to Muslims.

And let’s face it, this is true. Sure, we call Timothy McVeigh a terrorist, too—but we have to remind one another to do so—like mentioning that tomatoes are actually a fruit.

In the same way, in terms of men creating public disturbances, the word “thug” has taken on a racialized air. Of course, the word can still also be used to refer generically to a ruffian, and thuggish, as in thuggish behavior, is a race-neutral term. But words have multifarious meanings at any given time, and when a bunch of young guys take over a public space and/or fire guns, the term “thug” is used more readily when the perpetrators are black than white. “Thug” is “young black man up to that stuff people like him do.”

For example, this surfers’ riot was not classified as the doings of “thugs” the way it would have been if the guys were black; comments rarely used that word, for example. Make no mistake: black America’s own love-hate relationship with the word “thug” as archetype has played a part in the browning of the term. But the fact remains.

Language can give away fear of the other. The “terrorist” is most readily thought of as someone who comes from beyond our comfort zone. We can consciously state that Dylann Roof, too, is a terrorist—but subconsciously, the word in most of us summons events like recent ones in Paris and San Bernardino. We consciously know there can be a white thug. But subconsciously, in terms of street crime, “thug” more readily calls up a black face, just as “animated cartoon” more readily calls up a talking animal than an office bureaucrat.

Linguistic xenophobia is deep-seated in us humans. The classic example is the ancient Greeks referring to outsiders as barbarians. But that’s just the tip of the iceberg. Indigenous groups’ names for themselves translate quite frequently as meaning “the people”—inherently distinguishing others as “other”—or even more specifically, “the best people,” “the original people” and so on. One such language has special pronouns used to refer to its own speakers, with other pronouns referring to other people. It is almost certainly hard-wired in humans to distrust people outside of one’s inner circle.

If our language reflects this, we need to work on it. But we must be careful to distinguish who the “we” is here. Discrimination is not baked solely into the language of those often designated as the ones “out there,” the less educated, the comment section trolls. Let us reflect upon, as it were, the log in our eye.

In Blue America, for example, the word “sexist” is selectively applied. The American who despises and oppresses women is considered morally repellent. But the man in a tribal or Third World society whose views on women are even more medieval, in our terms, is often pardoned as “traditional.” The idea often expressed is that his views aren’t our business—even if that man has ample access to modern conceptions of gender equality.

Sure, we can allow in a technical sense that this “traditional” man is sexist—but the term applies for us more immediately to, say, Donald Trump’s comments about Megyn Kelly. By “sexist” we mostly mean Western men, and on a certain level exempt “traditional” men from the judgment. This could be seen as dehumanizing these men as “other,” with enlightenment less relevant to them than to us.

Similarly, there is a stratum of America that finds devout Christianity quaint and laughable among whites, but authentic and even charming among black people. Most people who would refer to George W. Bush being “Christian” with a knowing roll of the eyes would never refer to President Barack Obama being a “Christian” with the same contempt. Rather, Obama’s religious faith is seen as a welcome warm note about him—his singing of “Amazing Grace” was welcomed more warmly than John Ashcroft’s singing, for example. “Christian” has a different meaning for many depending on race. People will differ as to whether white or black Christians are diminished by this double standard, but the fact remains.

So, yes, there’s a reason the Oregon men aren’t as readily called some names than others, and it’s their color. But let’s allow that it’s all of us—not just people it’s fun to feel superior to—who need to look into ourselves about why. 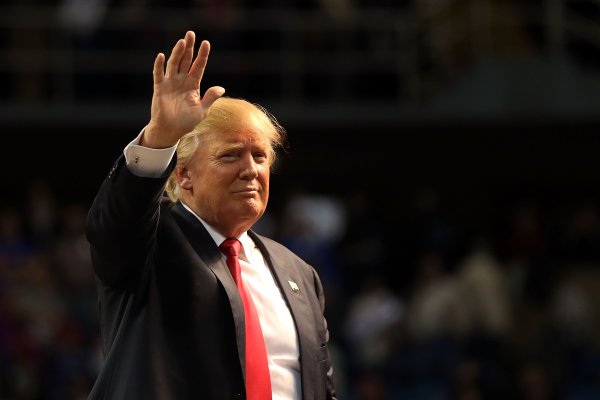 The Reason to Believe Donald Trump Will Lose
Next Up: Editor's Pick