President Barack Obama officially announced his executive actions aimed at reducing gun violence in a press conference on Tuesday, stressing the importance of background checks and expressing his frustration with mass shootings around the country.

The actions primarily aim to fix the so-called gun show loophole by requiring that anyone in the business of selling firearms — in stores, online and at gun shows —must have a license and conduct background checks on people trying to buy guns, though they won’t be required in every instance. Obama said he also plans to take steps to make background checks more efficient and secure.

An emotional Obama wiped tears from his eyes, speaking about the many mass shootings that have taken place in the country during his presidency.

“Second Amendment rights are important. There are other rights that we care about as well. We have to be able to balance them because our right to worship freely and safely — that right was denied to the Christians in Charleston, S.C., and that was denied Jews in Kansas City and that was denied Muslims in Chapel Hill and Sikhs in Oak Creek,” he said, referencing recent shootings.

Obama said people purchasing firearms online and at gun shows need to be held to the same background check standards as people buying guns in stores.

“Instead of thinking about how to solve the problem, this has become one of our most polarized, partisan debates despite the fact that there’s a general consensus in America about what needs to be done,” Obama said on Tuesday, urging political leaders and voters to do their part to support gun control measures.

The executive actions have been met with backlash from many who say they infringe on the right to bear arms, something Obama responded to during the press conference.

“I believe in the Second Amendment. It’s there written on the paper. It guarantees a right to bear arms. No matter how many times people try to twist my words around, I taught constitutional law. I know a little bit about this. I get it. But I also believe that we can find ways to reduce gun violence consistent with the Second Amendment,” Obama said.

Obama will host a televised town hall on gun violence on Thursday at George Mason University in Virginia. 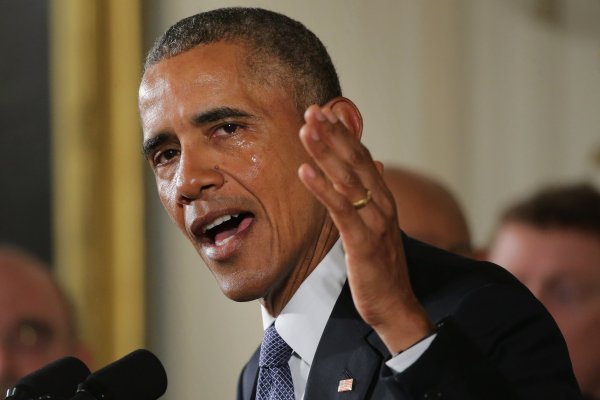