When HTC and Valve debuted their Vive headset last year, the tech media were convinced that it would pave the way for the future of virtual reality (VR). Until that point, the Facebook-owned Oculus Rift was the only real frontrunner in the modern VR space. Now, as the two companies are preparing to release the Vive to consumers in April, HTC and Valve have unveiled the newest version of the hardware.

The second generation developer version of the Vive addresses one of the discomforts associated with virtual reality — the inability to see anything in the real world around you. The new headset comes with a front facing camera, helping wearers blend the physical world with whatever is happening in the virtual world. That should reduce the possibility of bumping into furniture or other people in your surroundings.

“Being able to take a seat, find your drink, and carry on conversation arounds without removing your headset is only the beginning of what’s possible,” HTC said in a statement. The headset is also more compact than the first generation model.

The Vive’s raved-about controllers have been revamped as well. The new design incorporates softer edges, textured buttons, grip pads, haptic feedback, and a dual stage trigger to make it easier to interact with objects.

While the Vive has been well-received so far, it faces stiff competition from Oculus, which starts preorders for its Rift VR goggles on Wednesday. Companies like Google and Samsung are also selling VR headsets that can be powered by your phone, meaning they don’t have to be tethered to a computer to work.

Although the final consumer-ready version of the Vive hasn’t been revealed yet, HTC told Engadget in July that the headset will probably require a wired connection to eliminate latency. The Oculus Rift also requires a PC in order to work. 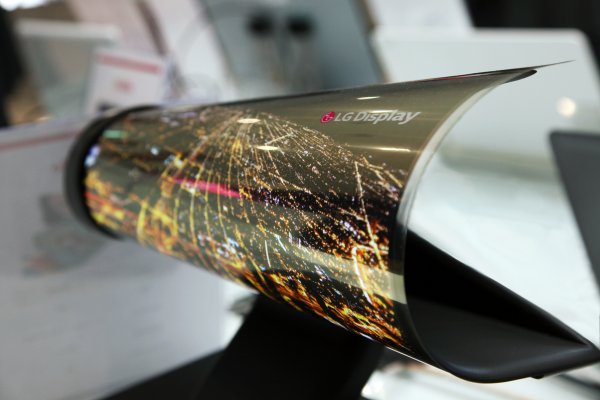 LG's Bendable Screen Can Roll Up Like a Newspaper
Next Up: Editor's Pick