4 Things to Know About President Obama's Executive Actions on Guns

President Obama announcd a set of executive actions on gun control Tuesday aimed at reducing gun violence in the United States. His announcement followed a spate of mass shootings that have once again ignited the national debate over gun control.

People were previously allowed to buy firearms at gun shows without undergoing a background check. Under the new rules, any business that sells firearms—in a brick-and-mortar store, over the Internet or at a gun show—must have a license and conduct background checks on people trying to buy guns.

The Bureau of Alcohol, Tobacco, Firearms and Explosives (ATF) had previously not required background checks from people making occasional sales or exchanges of firearms for a personal collection.

The action requires sellers at gun shows to conduct background checks but does not mandate checks in every instance. Those who buy or sell only as collectors would not have to undergo a check.

In a news release, the White House said the ATF is finalizing a rule to require background checks for people trying to buy the most dangerous weapons.

The President’s fiscal year 2017 budget will include funding for more ATF investigators and agents, and the FBI will hire more than 230 staff members to help with background checks, which will now be processed 24/7. The ATF also established a center to track illegal online firearms trafficking and will devote $4 million to adding personnel to the National Integrated Ballistics Information Network.

Obama has defended the legality of the actions

The executive actions have been met with opposition Republicans who say it infringes on the Second Amendment right to bear arms, but Obama defended his legal authority in taking such steps. “I’m also confident that the recommendations that are being made by my team here are ones that are entirely consistent with the Second Amendment and people’s lawful right to bear arms,” he said on Monday. 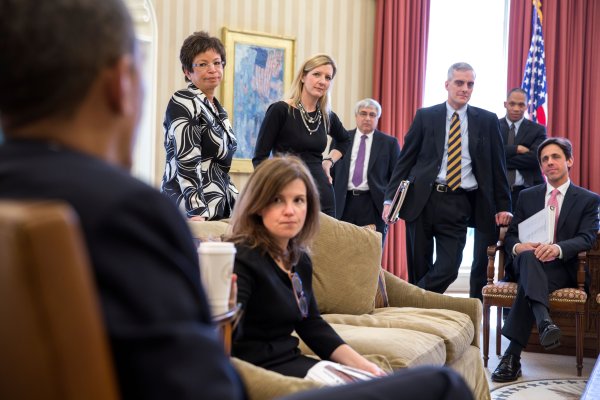 Meet the Obama White House's 'Smurfettes'
Next Up: Editor's Pick