Christie and Rubio Try to Take Down Trump, Indirectly

Ten miles apart on a frigid Monday in New Hampshire, two leading rivals each pitched themselves as the toughest on terror. But their true common foe, more than ISIS or radical Islam was frontrunner Donald Trump.

Roughly a month before Iowa and New Hampshire residents weigh-in on what is shaping up to be a brutal and bloody nominating contest among Republicans, Florida Sen. Marco Rubio and New Jersey Gov. Chris Christie offered dueling pitches on national security. While the events were billed as addresses on American leadership, they were very much about disqualifying their loud-mouthed rival.

“Our next president needs to be someone prepared on day one to execute his duty—someone with the judgment and the vision to lead this country back,” Rubio said, hinting at Trump’s inexperience as he stood in an American Legion hall in Hooksett. “We need a Commander-in-Chief with a record of leadership and judgment. Of all the candidates running in either party, only I have that record.”

Echoing that theme, Christie two hours later was denying Trump’s ability to command the nation’s military. “We are not electing an entertainer-in-chief. Showmanship is fun, but it’s not the type of leadership that will truly change America,” Christie said on the campus of Saint Anselm College in Goffstown, New Hampshire. “If we’re going to turn our frustration and anger with the D.C. insiders and the politicians of yesterday and the carnival barkers of today into something that will actually change Americans’ lives, then we must elect someone who has been tested, someone with proven experience.”

The two candidates, who badly trail Trump in the polls, are betting that caucus-goers and voters are finally starting to take their roles seriously, that the flirtation with Trump will yield a more sober analysis of the skills and traits required in the next President. To that end, Rubio and Christie are offering themselves as viable counterweights to Trump’s bombast.

At the same time, the two offer radically different pitches of themselves as president, relying on divergent personal narratives and resumes to make their case as the best replacement for Obama.

Reading off prepared text on his lectern, Rubio offered a brief tour of the global challenges facing the country, but offered little in the way of solutions, other than promising renewed American leadership. It was classic Rubio: high on poetry, light on specifics and highly aspirational.

Christie, reading from a teleprompter, talked up his role as a federal prosecutor after 9/11 and his own toughness—traits that offer debatable preparation for the role of commander in chief. But the remarks often strayed into a scolding for fellow Republicans to pick a “grown up” for a nominee, not a reality television star.

Neither speech stood to reshape the race on its own, but the remarks carried value in that these candidates were talking about the issue, while Trump was on Twitter mocking a Jeb Bush fundraiser.

Trump has climbed to the top of the polls by tapping voters’ anger and anxiety. He promised to block Muslims from entering the country in the wake of terror attacks in Paris and California, and has been outwardly hostile to other voting blocs of Americans. Yet with every inflammatory statement, he seems to rise in voters’ minds and crowds out other, more traditional candidates. Hence, Rubio and Christie and their back-to-back speeches on national security, an issue that no one could credibly suggest is Trump’s strong suit.

Rubio suggested that Americans allied with terrorists could be denied their Constitutional rights and sent to Guantanamo Bay. “I will have no qualms about treating you like the enemy combatant you are if you have actionable information and refuse to cooperate,” he said.

Read More: How Ted Cruz Is Winning the GOP Race–on the Ground

Elsewhere in his remarks, Rubio aired squarely at Rand Paul and Ted Cruz, fellow Senators whom he branded “isolationist candidates,” suggesting their calls for military budget cuts were leaving the nation less safe. “They talk tough, yet they would strip us of the ability to keep our people safe,” he said. “Words and political stunts cannot ensure our security. ISIS cannot be filibustered.”

Roughly two hours later, it was Christie’s turn to hammer America’s enemies—and Trump and, to a lesser extent, Rubio.

“As voters become more frustrated, angry voices begin to sound more reasonable. But it is not enough to express anger. We must elect someone who actually knows how we get things done,” Christie said.

Voters, however, are more interested in that anger than accomplishments at this point. Christie advisers are betting that mood changes and the candidate himself is trying to correct voters’ attitudes. “Bluster is not the leadership that we crave,” Christie said, before taking a subtle jab at Rubio and his dismal attendance record in the Senate. “Talking a big game and not showing up, or not knowing how, is not what we desperately need today.”

Residents in Iowa and New Hampshire traditionally settle on a candidate late in the process, with roughly half in 2012 deciding in the final week of the campaign. It’s why Rubio and Christie—along with others like Ohio Gov. John Kasich and former Florida Gov. Jeb Bush—are camped out in the early nominating states.

As Rubio joked Sunday night at a town hall in Raymond, voters are still whittling down their top choices: “My favorite line from New Hampshire is that I’m down to five (choices).” Rubio is hoping he can prompt some of those valued voters to cross Trump off their lists. 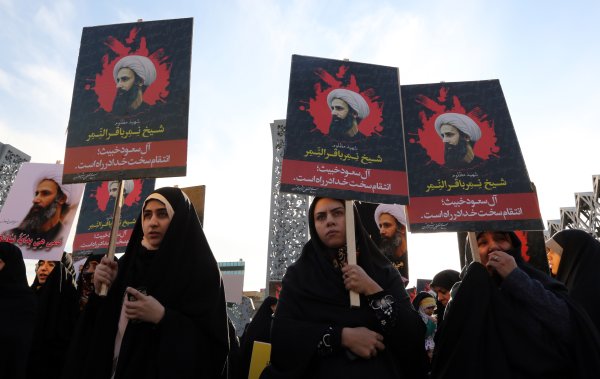