Carly Fiorina: We Must Tackle the Addiction Crisis

Republican presidential candidate Carly Fiorina speaks at the Growth and Opportunity Party, at the Iowa State Fair in Des Moines, Iowa, on Oct. 31, 2015.
Steve Pope—Getty Images
Ideas
By Carly Fiorina
Carly Fiorina was the Chairman and CEO of California-based Hewlett-Packard from 1999-2005. She now lives in Virginia with her husband, Frank.

When our daughter Lori was just 34 years old, my husband Frank and I lost her to the demons of addiction.

It broke my heart to watch the look that grew in Lori’s once-bright eyes as her addictions overcame her. There is an old saying: “The eyes are the windows to the soul.” As Lori grew progressively sicker, the potential disappeared from behind her eyes. The light, the sparkle she once had, left her. What remained was a dull, flat void. It was the look of hopelessness. And that look is what haunts me most.

Lori had been battling addictions for years. She had been in and out of rehab three times. As anyone who has loved someone with an addiction knows, you can force someone into rehab, but you can’t make her well. Only the addict can do that.

Virtually every minute of every day after those two police officers stood in our living room, Frank and I wondered what signs we had missed, what we could have done differently to help Lori overcome her demons. It is the torture of second-guessing that every parent who has lost a child to addiction goes through.

Unfortunately, too many of the men and women I have met on the campaign trail have experienced tragedies like ours. They have lost fathers and mothers, sisters and brothers, sons and daughters. Drug addiction is an epidemic, and it is taking too many of our young people.

This is a battle that we must fight. There are things that we can and must do.

We must invest more in mental health and in the treatment of drug addiction.

We shouldn’t be criminalizing addiction. If you’re criminalizing drug abuse, you’re not treating it. In New Hampshire alone, 85% of state prisoners have a substance abuse problem. These men and women need help.

We need to reform the criminal justice system and make sure we’re putting the right people in prison. The federal prison population has nearly doubled in the last 20 years—and nearly half of the inmates in federal prison are in there for non-violent drug offenses.

It’s important to keep violent criminals out of our communities—but it’s also true that prison is not always the right answer. Drug offenders who go into treatment—rather than through the normal criminal justice system—are about 25% less likely to be re-arrested in the two years after leaving the program.

It’s clear that there is a better way—and a number of states are on the forefront of this fight, developing innovative solutions to a problem that the federal government has failed to solve.

Texas now has specialized drug courts that allow more flexibility in addressing non-violent offenses. Georgia has made it a priority to help inmates earn a degree and gain skills that will help them get a job and stay out of prison.

In New Hampshire, I have gotten to see some of these innovations firsthand. Last month, I visited CADY (Communities for Alcohol- and Drug-free Youth), an organization that has had success in offering youth with substance abuse disorders a pathway to recovery that does not take them through the traditional criminal justice system. Instead, CADY gets them the help they need. We need to empower states like Texas, Georgia, and New Hampshire to implement the solutions they know are working.

At the moment that those two police officers delivered the news to my husband and me, we lost both the woman Lori was and the woman she could have been. All our hope for her and her life died. We grieved for Lori, for our family, for ourselves.

Unfortunately, I have seen the look from Lori’s eyes in too many people around the country. People are losing the sense of limitless possibility that has always defined this nation.

In too many cities, young people are getting access to drugs—and then getting arrested—and then turning back to drugs. It’s a terrible cycle.

We need to create a circumstance where people have a stake in their community—and they will only have that stake if they believe that their community offers them possibilities for a future. It’s time to take our country back from the professional politicians and return that sense of possibility to the people of this nation.

I look forward to discussing these important issues at the New Hampshire Forum on Addiction and the Heroin Epidemic at Southern New Hampshire University on January 5. 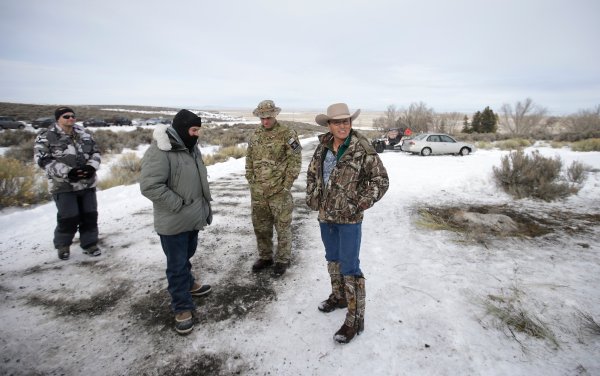 How the Oregon Standoff Was 50 Years in the Making
Next Up: Editor's Pick