Why Americans Are So Angry About Everything

The Capitol Building in Washington, D.C.
Getty Images
Ideas
By Rabbi David Wolpe
Wolpe is the Max Webb Senior Rabbi of Sinai Temple in Los Angeles, the author of eight books and has been named one of the 50 most influential Jews in the world by the Jerusalem Post.

Americans are angry. They are angry about school shootings and taxes and mistreatment and undeserved privilege and discrimination and government. There are differences between groups, but as a recent Esquire/NBC survey finds, the overall presence of rage is clear. The November survey of more than 3,000 American adults found that about half are angrier today than they were a year ago.

Why are Americans so angry? All of us, of whatever group, live some version of the “Whig interpretation of history,” a theory identified and criticized by the historian Herbert Butterfield almost a century ago that sees history as an ever-increasing march to enlightenment. If you believe that things should get better and better, then it is infuriating when they do not. In many ways, modern life is indeed better than it has ever been in the past. Report after report reaffirms this improvement.

But the “Whig school” mentality carries its own dangers. First of all, the improvement in world health may not mean that much to me if my own health care is less comprehensive than it was 10 years ago. Because we know so much more about disease, we are relentless in our discussion of wellness, diet and the pursuit of longevity. We have instant access to every catastrophe in the world, and so we obsess over creating perfect security. Extravagant lifestyles are paraded through our living rooms each night, so it becomes difficult to be satisfied with our ample, but still comparatively modest, means. Much of our frustration arises in an age of unlimited expectation when atrocities and injustice are constantly paraded before our eyes.

Particularly galling is our understanding of unfairness. From childhood the sense that someone has received more than we have arouses anger. This is a danger whenever goods are unevenly distributed, as they are in every society that has ever existed. In modern capitalist economies, the resentment is exacerbated by vast wealth and everyone’s easy glimpses into the worlds of the “haves.”

Some anger has uses. Without a push to do better, we would not have gotten to the pinnacle of living we have reached, where diseases have been subdued, literacy spread and hunger severely reduced. The restless drive to betterment has made unimaginable luxuries, such as having access to all human knowledge in your pocket, a commonplace even for many of the poor. Angry protests have often resulted in improved conditions. But when dissatisfaction becomes anger, it is less likely to be useful than polarizing and injurious. One question the survey did not ask, but which answers itself is this: is the country better for being so angry?

Angry people are poor communicators and even worse listeners. Their empathy is foreshortened, and they have trouble imagining the other’s point of view. It makes people less healthy, and when both parties are angry, fewer are likely to find middle ground. If the only way people feel they will be heard is when they are angry, then our public discourse will be an arena for shouting past one another. Now that a sanctified modern method, a poll, has shown we’re angry, perhaps we can have a reasoned public discussion about how to calm the rage and begin the work. You can be principled even when you speak in a soft voice. 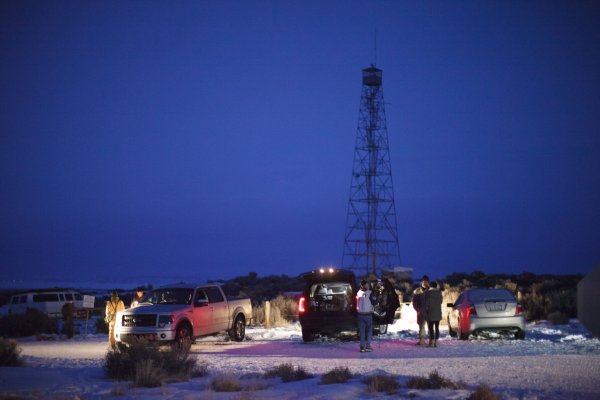 Let's Call the Oregon 'Protesters' What They Are: Terrorists
Next Up: Editor's Pick