When Field Marshall Abdel Fattah Al-Sisi, Egypt’s defense minister, declared on national television that he was stepping down to run for President, it put an end to months of fevered speculation. Nine months ago, in a similarly televised appearance on July 3, 2013, Sisi announced that he had just overthrown President Mohamed Morsi. He was flanked by Egypt’s two most important religious leaders, the Grand Sheikh of al Azhar Mosque and Pope Tawadros, head of Egypt’s Christian church. It was supposed to be an encouraging statement — Egypt’s two faiths united on one stage, standing by a military man who decided that a secular coup was better for the country’s stability than the rule of an Islamist, no matter that he was the country’s first freely elected president.

For Egypt’s eight million Christians, many of whom had fervently prayed for God to deliver them from an Islamist leadership that threatened to write their rights out of the country’s new constitution, it was a miracle. They hailed al-Sisi as a messiah, the only one who could have saved them. But that slavish mixing of religion and politics also made them a target. Within days the full brunt of the Islamists’ rage was directed at Egypt’s Christians in one of the worst spasms of communal violence the country has ever seen. Sixty-three churches were burned, Christian orphanages and businesses were ransacked, and graffiti assaulting Egypt’s Christians as “dogs of Tawadros” was scrawled across the ruins. In October, unknown gunmen opened fire on a wedding party at a Cairo church, killing five, including an eight-year old girl. “It felt like we were at war,” says parishioner Nagah Sehata, who was in the church office when he heard the gunshots.

Now that Sisi is planning a presidential run, he can count on solid support from a Christian population traumatized by fears of continued communal attacks, no matter how many questions come up about his dictatorial tendencies. As de facto head of a military-led government, Sisi has presided over unprecedented crackdowns on the media, on freedom of speech, and on political organizations. His government has overseen the sentencing to death by a loyalist court of 529 Morsi supporters for their supposed role in the death of a police officer, and another 1000 members of the Muslim Brotherhood — Morsi’s political party, now declared a terrorist group — have been killed by security agencies.

Still, Christians backing Sisi defend their choice. “If Egypt had not been saved by Sisi, you would have seen an exodus of all the Christians from Egypt,” Naguib Sawiris, a Christian and one of the country’s most prominent businessmen, told TIME last month. Majority rule in the Arab world leaves minorities at risk, he says, so better to support a secular-leaning coup-maker than risk marginalization and oppression by popularly-elected Islamists.

That kind of thinking may preserve Christian interests in the short term, but it risks putting them on the wrong side of history, says Michael Wahid Hanna, an analyst at the New York-based Century Foundation, a foreign policy think tank. “Christians in the region are forced into these Faustian bargains, in which they end up supporting authoritarian regimes for fear of what the alternative would look like,” says Hanna. “But the price is that it can aggravate underlying sectarian tensions and create further animosities and bigotry.” That leaves them even more vulnerable, and thus more likely to defend the strongmen who abhor democratic change. The Egyptian Christian leadership’s long history of accommodation with dictators is testament to this dangerous tendency.

When the revolution of January 2011 threatened President Hosni Mubarak’s 30-year reign, Christians had every reason to be apprehensive. Under Mubarak, Christian leaders could expect patronage and protection. So when tens of thousands of protesters assembled in Cairo’s Tahrir Square to call for Mubarak’s ouster, the head of the Coptic Church at the time, Pope Shenouda, ordered Christians to stay home. Father Abdelmessiah Bassit was one of the few priests who defied Shenouda’s directive, believing that it was better for Egypt’s Christians to stand with the people. “Shenouda warned me that it would be an Islamic revolution, not an Egyptian revolution, and that it would destroy us,” he muses. “Shenouda was right.” Little more than a year later, the Islamist Muslim Brotherhood had been voted into power, led by party stalwart Morsi.

Under Morsi, physical assaults against Christian targets declined, but a far more pernicious anti-Christian rhetoric rose in its place. Female Christian students were asked to wear veils on some university campuses, and churchgoers were forced to lower the volume of their prayers and hymns in Muslim-dominated neighborhoods. Morsi declined to attend Christmas mass, breaking an annual tradition typically carried out by Egypt’s head of state. When the Islamist-dominated parliament rammed through a new constitution that effectively enshrined Islamic law above all else, Christians feared the eclipse of their rights and identity. Bassit, regretting his early support for the revolution, urged his congregation to pray for Morsi’s downfall. Sisi’s coup, he says, was God’s answer.

The country, beset by economic collapse and a rise in terrorism, will pose a challenge to any future leader. Christians are already praying for Sisi’s success, but they will bear the brunt if oppression grows or he fails in office, says one prominent Christian blogger, who asked that his identity not be revealed for fear of retaliation. “If Sisi can solve Egypt’s problems, he will ride a wave of popularity to cement his power and we will have another dictator. If he fails, Egyptians will lose faith in the one institution that has stayed pristine through all this upheaval – the army,” says the blogger. “Either way we will pay the price.”

—with reporting by Ashraf Khalil / Cairo 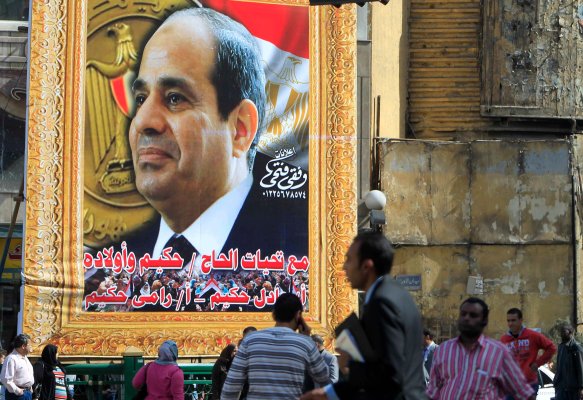