Senator Marco Rubio, a Republican from Florida and 2016 presidential candidate, speaks during a town hall meeting at the Pella Golf and Country Club in Pella, Iowa, U.S., on Wednesday, Dec. 30, 2015.
Bloomberg—Bloomberg via Getty Images
By Philip Elliott / Raymond, N.H.

Presidential hopeful Marco Rubio is promising that he would reverse President Obama’s executive action on gun rights on his first day in the White House, his latest play at New Hampshire’s deeply pro-gun Republicans.

Speaking Sunday evening in the Granite State, Rubio cast the man he hopes to replace in the White House as someone trampling the Constitution. Rubio’s remarks came hours before Obama was set on Monday to announce new moves to strengthen background checks that would-be gun buyers face.

“He has waged war on the Constitution,” Rubio told a packed crowd late Sunday in Raymond, N.H. “He is obsessed with gun control.” Obama’s moves were “meant to further erode the Second Amendment” and deny Americans the rights given by God, he argued. “I believe that every single American has a Constitution—and therefore God-given right—to defend themselves and their families,” Rubio said.

Rubio’s comments reflect not just national Republicans’ broad distrust of Obama but also New Hampshire Republicans’ deep commitment to gun rights. It’s a smart move for Rubio, whose campaign is increasingly visible in New Hampshire and in Iowa after months of keeping a low profile while building a political machine to challenge better-polling rivals such as Donald Trump and Ted Cruz.

Making his way through a snowy Sunday schedule, Rubio repeatedly criticized Obama’s plans to curb access to firearms designed to reduce gun violence. Like his rivals for the GOP nomination, Rubio said the moves were too aggressive and unlikely to make any difference. He cast it as the latest in a string of Obama’s “illegal and unconstitutional” orders, which are highly unpopular among conservative voters who pick the GOP nominee.

“Law-abiding gun owners are not the problem in this country. The problem are criminals, and criminals don’t care what laws you pass,” Rubio said. “You can pass all the gun laws in the world that you want. It will not stop the criminals.”

He noted the shootings in San Bernardino, Calif., would have passed the tougher background checks Obama is expected to push. “They had never before done anything before,” Rubio said.

Gun sellers already must do criminal background checks, but vendors who participate in gun shows can skirt those requirements. Obama is scheduled to meet with Attorney General Loretta Lynch on Monday to get an update on her three-month review of gun laws and is expected to tighten Americans’ access to guns through executive action.

While criticizing Obama’s moves, Rubio said they would be temporary. “Don’t worry,” Rubio said. “On my first day in office, behind that desk, don’t worry, those orders are gone.” 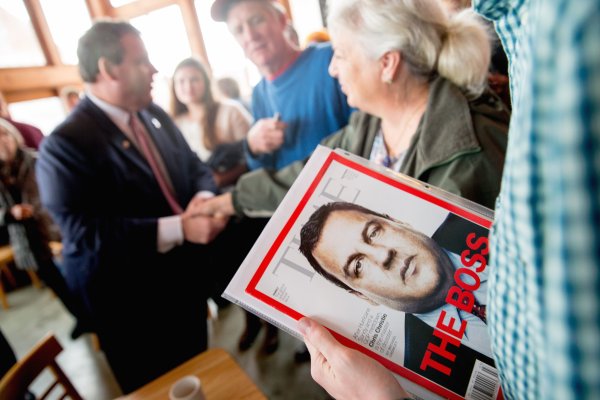 Chris Christie Shifts Focus to Iowa
Next Up: Editor's Pick