Armed protesters occupied a building at a federal wildlife refuge in Oregon Saturday after a protest against the federal prosecution of two local ranchers for arson.

After a peaceful march in support of two local ranchers, an armed militia occupied the headquarters of the Malheur Wildlife Refuge, according to a statement from Harney County Sheriff Dave Ward. Ward called the occupiers “outside militants” and urged locals to stay away from the Refuge as law enforcement work to diffuse the situation. The protesters remained in the building on Sunday morning

The militia claimed they had up to 100 supporters with them and is partly led by Ammon Bundy and two of his brothers. Bundy is the son of Nevada rancher Cliven Bundy, who made headlines in 2014 for refusing the pay the federal government to graze his herd on public land and then gained notoriety again after making racist comments that caused many of his supporters to distance themselves from his cause.

“We’re out here because the people have been abused long enough,”Ammon Bundy said in a video posted to Facebook. “Their land and their resources have been taken from them to the point where it’s putting them literally in poverty. And this facility here has been a tool in doing that. It is a people’s facility, owned by the people.”

He said the occupation was a “hard stand against this overreach,” and said the occupiers were prepared to stay in the building until citizens of Harney county “could use these lands as free men.” He cited the EPA as an example of a federal agency that patrols land and resources and drives Americans into poverty. The Malheur Wildlife Refuge is run by the National Fish & Wildlife Service.

In an earlier video posted to Facebook on Thursday, Ammon Bundy issued a call to action “to the individual, to the patriot,” urging them to “come to Harney county” on Jan 2. “This is not a time to stand down, this is a time to stand up,” he said.

The occupation sprung from a march in support of two ranchers, Dwight Hammond Jr. and his son Steven Hammond, who are due to report to prison on Monday after a federal judge ruled the sentences they had served for a 2001 arson were not long enough. The father-son duo were convicted three years ago of arson after prosecutors said they intentionally burned 130 acres of land, and their conviction falls under an expansive anti-terrorism law, the Oregonian reports, which means they have to go back to serve more time. Roughly 300 supporters marched through Burns to support the duo.

“We are not terrorists,” Ammon Bundy told CNN, claiming that the occupation is intended to restore “constitutional rights.” 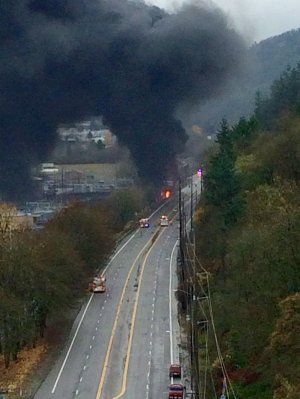 Truck Driver Dead in Oregon After Fiery Collision With Cargo Train
Next Up: Editor's Pick