New Jersey Gov. Chris Christie had already crossed the 90-minute mark at an Irish pub, when he began to mock his aides for signaling him to wrap up the 300-person town hall event. “To heck with them,” he said, as December wound to a close. “I’m going to empty the tank here at Mickey’s.”

It was typical Christie—defiant, brash, entertaining—overflowing the sort of charisma that has defined his rise in politics. But the location was a surprise, not because of all the alcohol but because of all the grain silos down the road. As recently as a few months ago, even Christie’s top aides predicted he would spend all his time in 1,200 miles away in New Hampshire, his make or break state where he’s aggressively organized and campaigned. But in recent weeks, the Christie has shifted strategy as he eyes an opening in Iowa, not to win, but to place ahead of Bush.

“I’m going to be here a lot in the next 33 days,” he told the roomful of voters, after telling reporters he’s planning to split his time between Iowa and New Hampshire roughly evenly through Feb 1.

One of the major reasons for Christie’s new optimism is that he found he will be able to capitalize on his longtime friendship with the top Republican in the state. Though Gov. Terry Branstad is officially neutral in the Iowa caucus, Christie’s Iowa team is run by Phil Valenziano, who was the political director for Branstad’s 2014 re-election campaign. His senior advisor in the state is Jake Ketzner, another Branstad alum. “I wound up getting a lot of support from a lot of the people who are on Gov. Branstad’s team,” Christie admitted. Two prominent Republicans with close ties to the governor, agribusiness executive Bruce Rastetter and state Speaker of the House Kraig Paulsen, are hosting a fundraiser for Christie in Iowa on Jan. 15. (Many other Branstad alums, including Dave Kochel and Tim Albrecht are working for Bush, who has pulled his campaign’s television ads from Iowa airwaves amid a financial crunch.)

For Christie, a former chairman of the Republican Governors Association, or RGA, Iowa is something of a test run. Christie is betting that he can leverage his relationships and connections to tap into a state-by-state network of governors’ staffers and donors in Republican-led states like South Carolina, Massachusetts and Michigan.

Christie’s campaign manager, Ken McKay, was the political director of the RGA when Christie led the group in 2014. The RGA’s executive director at the time, Phil Cox, runs Christie’s super PAC, America Leads, that is aggressively reaching out to other governors to lay the groundwork for possible support. Christie has already wrapped up the endorsements of Maine’s Paul LePage and Maryland’s Larry Hogan —both of whom owe their elections in part to the RGA, and therefore Christie. As a top political aide to one un-aligned GOP governor put it to TIME, Christie has a “tremendous amount of goodwill” with most of his colleagues.

At meetings of the RGA for years, the nation’s governors have said one of their own should be president, but the first casualties of the 2016 race were Scott Walker, Rick Perry, and Bobby Jindal. “There’s long been chatter among the governors that the next nominee should be an executive,” the aide said. “There was a lot of optimism with Walker, Perry, and Jindal. And, unless Jeb [Bush] turns it around, it’s now looking like Christie is the last one standing and there may be people willing to take a more public stand.”

In Iowa, Christie hardly goes through an event in the state without first mentioning that he has campaigned and fundraised for Branstad, the grandfatherly longest-serving governor in the nation. When asked about local policy issues, Christie frequently invokes Branstad as a source of counsel. “I will continue to rely on the governor to give me direction in that regard,” he said when asked about farm policy in Muscatine.

Mikel Derby, another veteran of the Branstad campaign and a Christie backer, said the model of tapping into governors’ staffs is essential for Christie. “Guys like these three are very good at getting the right people on the bus and getting the bus moving in the right direction,” he said of the Iowa team, adding such hires are “critical for any politician to be able to get the most out of their time campaigning in states away from their home state.”

Pundits and rival campaigns have pointed to Christie’s absence of any organization outside the first two states, as presaging doom later in the calendar, even if he has a strong showing in the first two weeks of February. Christie brushes off the criticism. “The idea is, if you do well in Iowa and New Hampshire, you will have momentum, and I’m not worried about what will happen after that,” Christie tells reporters.

Once the out-and-away leader in the early GOP polls, Christie is recasting himself as the hard-working underdog can marry establishment appeal with a style that provides an outlet to frustrated voters. While he’s wary of setting expectations too high in Iowa, where he’s polling in the low single digits, aides believe they can out-place Jeb Bush, another former governor, in the Hawkeye State, riding that to victory or a close second in New Hampshire, where he’s surging in the polls to second behind Donald Trump. From there his path is less certain—he’s done next to nothing to organize beyond the Feb. 9 contest—and thus the importance of relying on governors.

The strategy remains a bit of a stretch, with others like Texas Sen. Ted Cruz and Florida Sen. Marco Rubio racking up endorsements, while developer Donald Trump continues to lead in crowd size and in the polls. “In the short term it’s not going to be a lot of outright endorsements, but there will be people giving help as they can behind the scenes,” the aide to the un-aligned governor said. 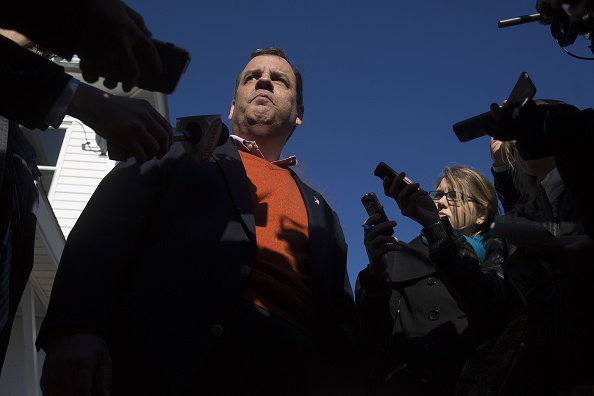 Christie Bashes Rubio on Attendance Record in Iowa
Next Up: Editor's Pick