These 30 Numbers Explain the 2016 Election

Republican presidential candidate Donald Trump gives a thumbs up to the crowd as he arrives at a campaign event at the International Air Response facility on December 16, 2015 in Mesa, Arizona.
Ralph Freso—Getty Images
By Center for Public Integrity / Michael Beckel

Estimated amount of money politicians and political groups will raise during Election 2016: $7.5 billion

Number of families who provided nearly half of all the early money raised in the 2016 White House race: 158

Amount the Wilks family of Texas contributed to a pro-Ted Cruz super PAC this year: $15 million

Ratio by which super PACs out-raised presidential candidates during the first six months of 2015: 2-to-1

By which Republican Jeb Bush’s super PAC Right to Rise USA out-raised his campaign during that period: 9-to-1

Percentage of TV ads aired so far in the GOP presidential primary sponsored by super PACs and other outside groups: 80%

Percentage of TV ads in the Democratic presidential primary sponsored by candidates’ own campaigns: 99%

By her Democratic Party challenger Bernie Sanders during those same two months: 0

Portion of New Hampshire polls in which Clinton led Sanders during that period: 1/9

Number of days since July 20th when someone other than Donald Trump has led in Real Clear Politics’ average of national GOP polls: 3

Date on which Donald Trump said he was “not using donors” to fund his presidential bid: June 16th

Minimum amount of money that individuals have since donated to his campaign: $3.9 million

Number of current or former GOP governors who have dropped out of the presidential race so far: 3

Number of Republican presidential candidates who are millionaires or billionaires: 13

Number of political ads Marco Rubio’s campaign sponsored between April 13th, when he entered the presidential race, and November 23rd: 0

Estimated amount that the Conservative Solutions Project, a group that doesn’t disclose its funders, spent on pro-Rubio ads during that time: $8.5 million

Rank of Jeb Bush and Marco Rubio, respectively, among lobbyists who have bundled campaign contributions for GOP presidential contenders: 2, 1

Portion of campaign funds raised by Jeb Bush from donors giving the legal maximum of $2,700: 4/5

Portion raised by Marco Rubio from such wealthy donors: 3/5

Percentage of campaign funds Bernie Sanders has raised from donors who gave less than $1,000: 93%

Amount James Bond actor Daniel Craig donated to a purportedly pro-Bernie Sanders super PAC led by a man with a history of running afoul of creditors: $47,300

Minimum number of people who got White House sleepovers during the Bill Clinton administration who have donated to Hillary Clinton’s 2016 campaign: 34

Percentage of eligible voters in the United States who cast ballots in the 2012 general election: 58%

Approximate number of Iowans who participated in the 2012 Republican caucuses: 122,000 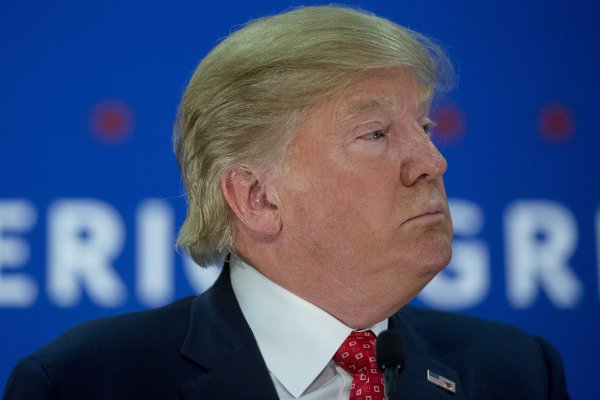 Trump Says New Hampshire Newspaper Is a 'Pile of Garbage'
Next Up: Editor's Pick