Review: Concussion Has the Truth on Its Side

Will Smith in a scene from Concussion.
Melinda Sue Gordon—Columbia Pictures/AP
By Joe Neumaier

Movies about corporate truth-tellers loom large in the American landscape. Serpico, Silkwood, Erin Brockovich, The Insider—watching cinematic Davids warn about out-of-control Goliaths has undeniable force. There’s one big force, the National Football League, trying to stop Dr. Bennet Omalu (Will Smith) from blowing a whistle in Concussion, a true-life drama that’s as surprisingly brave as it is gripping.

After Omalu, a Pittsburgh forensic neuropathologist, dissects the brain of recently deceased 50-year-old football hall of famer Mike Webster (David Morse), he discovers specific proteins present that likely led to the retired star’s madness and death—and which Omalu believes were caused by the repeated head impact Webster endured on the field. Autopsies of other ex-NFL-ers back up the theory, and soon Chronic Traumatic Encephalopathy or CTE, as Omalu names the disease, riles an angry football league. But Omalu presses on, aided by NFL neurological consultant Dr. Julian Bailes (Alec Baldwin), and becomes ever more worried that a preventable tragedy is literally playing out in front of millions of fans.

Writer-director Peter Landesmann intercuts Omalu’s building an argument about a major entertainment industry’s negligence with his building a home with Prema (Gugu Mbatha-Raw), and she and Bailes voice what feels like an obligatory counter-argument. “This game is beautiful,” Prema says at one point, while Bailes waxes about its appeal: “It’s incredibly violent … and then, suddenly, it’s Shakespeare.”

But that’s the extent of the equal time the NFL gets, and Concussion is stronger for keeping such pronouncements to a minimum. Omalu—a man of faith who quirkily asks the corpses he works on for help so he can “tell their story”—has belief in what he sees in his lab, and his calm, multiple-medical-degreed logic anchors the story.

Smith tamps down his charisma to portray a courtly, cerebral and compelling man of science; Omalu is an Nigerian immigrant who loves America but is shocked at its willingness to be blindsided. As Smith bows his head to listen, or sits mystified as NFL reps state how his expertise doesn’t trump bought-and-paid-for research, his eyes fill with something between pity and disgust: The former players whose histories haunt Omalu mean more to him dead than they did to the NFL alive.

In addition to Gugu Mbatha-Raw’s astute confidante, Baldwin’s gruff, loyal insider and Morse’s sad lost soul is Albert Brooks as Omalu’s boss and Eddie Marsan as a skeptical expert. (Luke Wilson has a brief moment as NFL Commissioner Roger Goodell, presiding over a committee hearing.) In the midst of an ongoing debate, Concussion takes a side, but it’s not bullheaded, nor is it fearful. Like the best films of its genre, it knows veracity is the best defense. 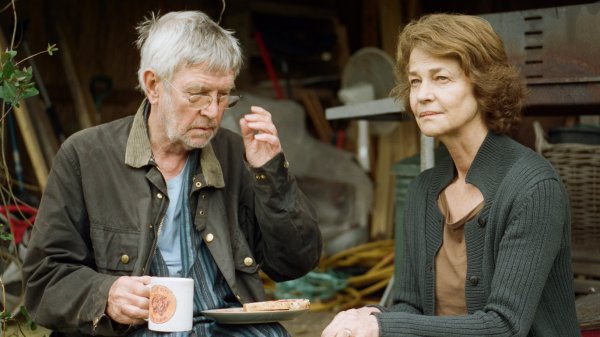 Review: Charlotte Rampling Gives a Performance for the Ages in 45 Years
Next Up: Editor's Pick