There's a New Way to Track Santa This Christmas

If you’re looking for a sign of the technological times, look no further than how Santa is tracked across the night sky every year. The traditional began sixty years ago this week, when a typo in a Sears newspaper advertisement had children calling the Continental Air Defense Command (now known as NORAD) to ask the whereabouts of Santa Claus. This year, the tradition continues with Cortana, Microsoft’s voice-enabled assistant, providing instantaneous updates on command.

Over the years, various media has adopted the Santa-tracking phenomena. In the early days (as well as today) volunteers staffed phone banks at NORAD, fielding thousands of Christmas Eve calls each year. Soon after, radio reports tracked Kris Kringle’s progress, followed by television news shows breaking stories of his sleigh streaking across the sky. In 1997, NORAD launched its popular Santa-tracking website, and once the smartphone revolution put a computer in every pocket, you can bet there were plenty of Santa tracking apps, too.

But the Cortana connection brings an added dimension in the annual search for Santa. The relationship between NORAD and Microsoft began in 2013, when the Windows company offered up its Azure cloud technology to help shoulder the load, as millions of visitors visited the radar-tracking website leading up to Christmas.

This year, Microsoft has made the tracking system even easier to use by plugging updates into Cortana and giving kids more detail on Santa’s locations through Bing. “We focus on big cultural moments and building an experience that sparks the imagination,” says Matthew Quinlan, director of product marketing for Bing. “The holidays, for us, are one of those great natural moments that bring people together and fuel this sense of wonder. And at no time is that more important than this time of year, with children and families coming together.”

To use Cortana to find Santa, just pull up the voice-based assistant any time before Christmas, and ask. Each time you do, you’ll get a different response. For instance, in the countdown to the big day, Cortana reveals that Santa is hitting the North Pole barber for a beard trim, trimming reindeer hooves, and making cocoa with tiny marshmallows for the elves. But once Christmas Eve arrives, the updates shift to reveal the cities that Father Christmas is flying over, with bits of trivia about each place as well.

Good little girls and boys with Windows 10 devices can also track the sleigh on Windows Maps. If they load up the NORAD website using the Microsoft Edge browser, they can also use their computer to color in a maze, Christmas tree, and other holiday-themed drawings — a great way to keep alert while staying up late to catch you-know-who sliding down the chimney.

But if you don’t have a Windows 10 device, you’re not necessarily on the naughty list. Cortana is now available on iOS and Android, so everyone can track Santa, regardless of their smartphone operating system. And there’s always the official Santa-tracker website and plenty of apps to choose from. 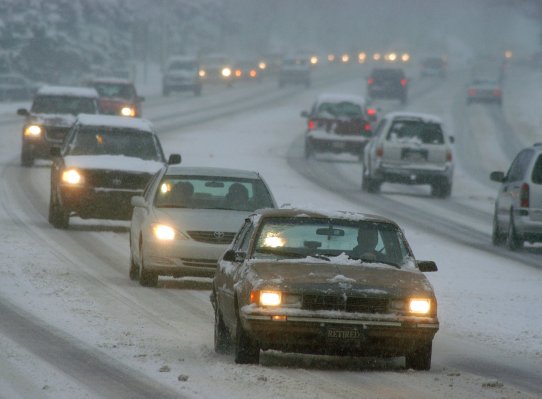 The Worst Time to Drive This Christmas
Next Up: Editor's Pick