The boss of Thailand’s military regime, Prayuth Chan-ocha, made a comprehensive speech Wednesday providing justifications for the junta’s increasing authoritarianism.

The head of the junta that seized power in a May 2014 coup also reiterated a promise to hold democratic elections in 2017, Channel News Asia reports.

“Some say I came to power illegitimately,” Prayuth said, referring to the military coup of May 2014. “I’d say we came in to fix things and push needed reforms.”

The military junta has been stifling dissent since coming to power last year. Journalists and activists critical of the government have been arrested, and many have accused the country’s leaders of misusing the lèse majesté law — which ostensibly exists to protect the standing of the Thai royal family — to silence opposing voices.

“To those who say we lost our democracy, I’d say I am sorry, but we cannot afford to waste the time we have now to change our country,” Prayuth said. “Those accusing me of breaching human rights, they need to understand that we are operating in unusual circumstances.”

The dictator has also sought to raise public morale through music, releasing his second patriotic song this week. The ballad, entitled “Because You Are Thailand,” is his New Year present to the people of Thailand, according to comments cited by Reuters. It includes lyrics such as: “If we join hands and breathe together, the day we hope for is not far away,” and “Because you are Thailand, you will not let anyone destroy you.”

The Prime Minister’s first morale-boosting musical release, entitled “Returning Happiness to Thailand,” was released soon after last year’s coup and is a regular fixture on Thai radio and television.

Meanwhile, a new poll released by the Thailand government on Wednesday also revealed overwhelming support for the country’s military rulers by its citizens, with nearly all respondents reporting they were happy with the authoritarian government’s performance thus far, according to the Guardian.

The poll released by the Thai National Statistics Office said 99.3% of the 2,700 people surveyed nationally were satisfied with the military junta’s performance since last year.

The poll also showed that 98.9% of respondents expressed confidence in the government’s ability to address the Southeast Asian nation’s problems. 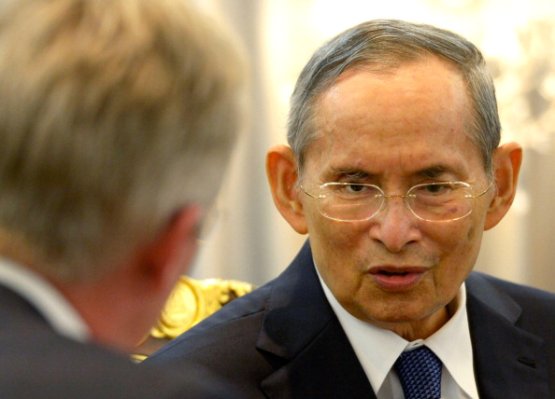