At a rally in Michigan Monday, the Republican presidential candidate recounted Clinton’s trip to the restroom, which caused her to be late back to the debate stage after a commercial break, according to the Washington Post.

The women’s bathroom at the debate at Saint Anselm College Saturday was farther from the stage than the men’s room and occupied by a top staffer for rival candidate Martin O’Malley when Clinton arrived, according to an account in the Boston Globe.

Moderators began without her, prompting one of the weirder moments in a 2016 debate so far.

Trump went on to criticize Clinton for losing the Democratic primary in 2008, using a vulgar word for penis from the 1960s in a novel way.

“She was favored to win, and she got schlonged,” he said.

At the debate, Clinton had harsh words for Trump—the only Republican candidate named by any of the Democrats that night. She said his “bluster and bigotry” about Muslims are making him “ISIS’ best recruiter.”

“They are going out people showing videos of Donald Trump insulting Islam and Muslims in order to recruit more radical jihadists,” she said. 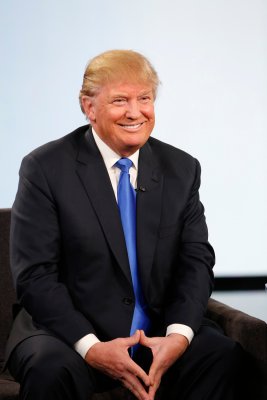 Trump Says GOP 'Threw in the Towel' on Budget Deal
Next Up: Editor's Pick