Review: In Anomalisa, Puppets Have Problems Too

As R.E.M. once sang, everybody hurts. In Charlie Kaufman and Duke Johnson’s Anomalisa, that goes for puppets too. The characters in this obsessive drama about human suffering and isolation are stop-motion-animated figures, something like the ones in Wes Anderson’s Fantastic Mr. Fox, only a lot less cute and a lot more depressed. Michael (voiced by David Thewlis) is a successful motivational speaker—his specialty is customer service—who has come to Cincinnati from Los Angeles for an engagement. After checking into his anonymous, faux-fancy hotel, he calls an old flame he’d walked out on without explanation years before. He’d been thinking about a final letter she’d sent him, and had become wistful about her. We hear someone read the letter in voiceover, but the voice attached to these feminine hurt feelings belongs to Tom Noonan—in fact, as Michael goes about his all-too-human hamster-wheeling, every voice he hears, male and female, is voiced by Noonan, a smart idea that amplifies Michael’s distance from his own feelings, as if he were moving about in a stage production being playacted by the wrong people.

Michael, it turns out, is cracking up. He meets with the old flame, but it doesn’t go well. In desperation he runs through the corridors of his hotel, knocking on doors, claiming he’s “looking for a friend.” It’s hardly a lie. And that’s how he meets Lisa, a young fan (voiced by Jennifer Jason Leigh, whose awkwardly cheerful presence gives the movie some soul). When Michael hears her voice— hallelujah, it’s not Noonan’s!—his previously dead eyes light up with wonder. At last, he has found someone genuinely human. Lisa—shy, slightly overweight, and with a minor facial disfigurement—is amazed and flattered by Michael’s attention. They sleep together in a scene that, particularly for puppet sex, is staged with remarkable tenderness, but it’s clear this bliss can’t last.

How many love, or nonlove, stories have begun this way? Kaufman (making his first film since his 2008 directorial debut, Synecdoche, NY) and Johnson (whose credits include Adult Swim’s Moral Orel) work hard to make us feel something for this man who’s capable of feeling so little for others, and the idea of using puppets to tell a story about intensely human experiences is inspired, to a point. But then we have to actually look at them: Their skin has a powdery, latexy, semi-translucent glow—they’re more like embryos than actual grown-ups, which is perhaps part of the point. Michael is a shell of a person, struggling to be a person. But he’s also a megalomaniac, a reality the film doesn’t quite cop to: He doesn’t recognize that every other human being is alone in his or her skin too. And once you start reckoning with Anomalisa’s obsession with self-absorption, the novelty of this one-man pity party begins to wear off. A little puppet pain goes a long way. 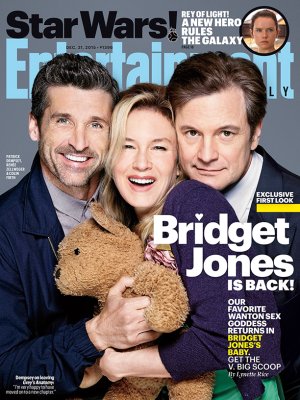 Here's Your First Look at the New Bridget Jones
Next Up: Editor's Pick