Getty Images
Ideas
By Nancy Loeb
Nancy Loeb is an assistant clinical professor of Law and the director of the Environmental Advocacy Clinic at Northwestern University Law School’s Bluhm Legal. She is an OpEd Project Public Voices fellow.

The water supply in Flint, Mich., contains toxic levels of lead that are particularly harmful to children. The costs needed to begin to fix this led Flint Mayor Karen Weaver to declare a state of emergency in mid-December.

This is a tragedy—one that was entirely avoidable. The poisoning is the result of short-sighted changes by the government that were focused on saving money and that were made without adequate consideration of potential consequences. If we don’t start addressing the underlying problems, there will likely be more Flints to come.

What happened in Flint?

Flint management decided to switch the city’s water source from water supplied by Detroit to a new source from Lake Huron. But because the pipelines needed were a year and a half away from being completed, Flint residents were switched temporarily in April 2014 to cheaper water from the Flint River.

Changing drinking water sources isn’t as simple as changing a budget number and flipping a switch. The pipes that deliver water within Flint—like the pipes in many cities throughout the U.S.—are old and made of or contain lead. The chemical makeup of the water from the Flint River makes it more corrosive than Detroit’s water, causing lead to leach from the aging pipes, contaminating Flint’s water with dangerous levels of lead.

A study presented in September by the Hurley Medical Center showed that blood lead levels in children under 5 years of age living in Flint zip codes that were supplied by the Flint River water increased dramatically in the year and a half that Flint’s water was sourced from the Flint River. Further, the number of Flint children in those zip codes with dangerously elevated blood levels more than doubled in just that year and a half.

We can’t undo what happened in Flint. But we can learn from it and protect potentially millions of children throughout the U.S. Here are four lessons from Flint.

1. The drinking water infrastructure in the U.S. is aging to the point of danger. In Chicago, where I live, for example, some of the pipes that deliver drinking water to homes are 100 years old. We drink water from Lake Michigan that is treated for safety from chemicals and disease, but between the water treatment plant and our taps, that water runs through old pipes that can leach lead. Chicago is now replacing 900 miles of water mains in a process that will take 10 years. Today, we know better than to use lead pipes to transport water. But millions of people in the U.S. are still getting water from old lead pipes. Until those pipes are replaced, the lead hazard will remain.

2. Short-term budget “fixes” often cost more in the long-run. After the lead issue was discovered, Flint was hooked back up to Detroit’s water supply for the short time left until the new Lake Huron pipelines are available. The cost to switch back is reported to be $12 million. In addition, there will be the costs of testing, monitoring and treating Flint’s children. These costs are what led Flint’s mayor to seek federal disaster relief.

3. We are not testing water at the tap enough to know whether it contains dangerously high levels of lead. Regulations issued by the Environmental a Protection Agency (EPA) to implement the Safe Drinking Water Act, which is supposed to protect public water sources, are insufficient to detect all lead problems. Under EPA’s Lead and Copper Rule, only 100 taps must be tested for lead in a public water system that serves more than one hundred thousand people. The failure to detect dangerously high levels of lead in Flint’s water clearly calls into question the adequacy of EPA’s requirements for testing at the tap.

4. The EPA is failing to adopt the most current health standard, set by a panel of experts convened by the Centers for Disease Control, for childhood lead exposures. The only good news coming out of the Flint tragedy is that officials there based the declaration of a health emergency on the more protective health standards adopted by the CDC in 2012. EPA still has not adopted that standard. They need to; our children deserve better.

It’s easy to put our heads in the sand and pretend that problems don’t exist or that we can’t afford to fix them. But we owe it to the children of Flint and all American children to face into these problems and allocate the funds needed to fix them. 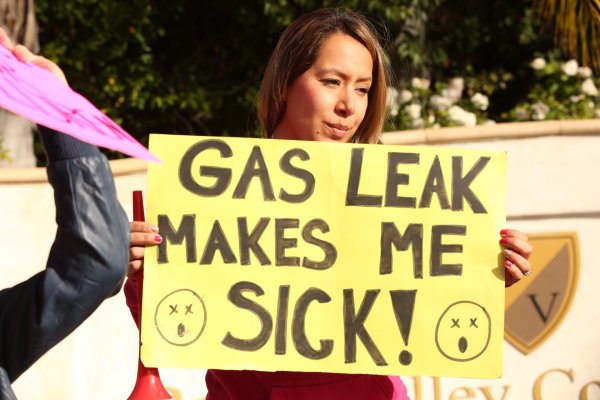 California's Worst Gas Leak Isn't Close to Being Fixed
Next Up: Editor's Pick