The Problem With That Major Force Awakens Scene

I never knew how much I cared about Han Solo until it was too late.

The public anticipation for J.J. Abrams’ Star Wars Episode VII: The Force Awakens has been so intense that, for a critic who has never had much invested emotionally in the franchise—that is to say, me—its impending release fostered anxiety more than anything else. The movie screened for critics on Tuesday, Dec. 15, at 8. By 11:30 I was at home working on my review: I was relieved that the picture wasn’t a complete disappointment—and was, in places, pleasurable enough—though I was troubled that, at the risk of dropping the mother of all spoilers, I couldn’t explain in detail my misgivings about one key scene. I did the best I could—for 2 a.m. thinking, at least—and went to bed at 3.

When my eyes opened at 9, a truth I hadn’t fully processed the night before hit me: Han Solo is dead. Odder yet, I felt terrible about it.

Here’s the thing I couldn’t say on Tuesday night, and probably still shouldn’t say, given the ferociousness of the Star Wars anti-spoiler brigade (who probably still don’t want to know that Rosebud was a sled): Near the end of The Force Awakens, Harrison Ford’s Han Solo is slain by the villain Kylo Ren, played by Adam Driver, who (shocker!) is his son. Mom is Carrie Fisher’s Leia, who was still a princess in 1977, the year George Lucas’ first Star Wars film was released; in Abrams’ 2015 Star Wars universe, she’s a general (and has wisely deep-sixed the cinnamon-bun hairdo for a more chic braided chignon). For Han Solo’s death scene, Abrams more or less borrows the staging of the now archetypal “Luke, I am your father” battle between Luke Skywalker (Mark Hamill) and Darth Vader (David Prowse), in Irvin Kirshner’s still-extraordinary 1980 The Empire Strikes Back. Han and Ren confront each other on a catwalk: Han tries to persuade his errant son to return to the Light side of the Force. Ren, having removed his Vaderish black helmet, gives an ardent speech about the difficulty of what he’s about to do, suggesting that he might be taking his father’s words to heart. Han, his careworn face momentarily set alight with love for the boy he once knew, seems to buy it—don’t buy it, Han!—before his evil offspring skewers him with a light saber.

Unlike the Vader/Skywalker contretemps, the moment isn’t private: John Boyega’s Stormtrooper-turned-hero Finn and Daisy Ridley’s scrappy scavenger Rey stand conveniently nearby, looking on—Abrams cuts to their faces, aghast, just in case we haven’t cottoned to the fact that this is a really intense moment. Han’s loyal, silky-tressed sidekick Chewbacca (with actor Peter Mayhew inside) sees it too, though his response feels more direct and less phony. And before long—even before we’ve had the chance to register that one of the most casually appealing characters of modern movies has just been killed off—Abrams is on to the next plot point. Nothing, not even the death of Han Solo, can stop the gears of his machine.

The direction and editing of this scene tells us a lot about modern mainstream movies and the way big dramatic moments have become a kind of currency, a chip to be cashed in for some brief emotional rush. Maybe that’s why the significance of Han Solo’s death, as dramatized by Abrams, didn’t hit me until the next morning—it was as if my subconscious needed some time to reprocess the sequence as it should have been done in the first place. Because even though I’d thought Han Solo meant little or nothing to me, reckoning with his death brought me back to the time I first saw him, in 1977, when Star Wars—or Star Wars, Episode IV: A New Hope, as we’re so dispiritingly expected to call it now—was released.

By now, we’ve all read—or refused to read—a million “My First Encounter with Star Wars and How It Changed My Life” essays, most of them written by men under 50. The image of Princess Leia as a slave girl in a golden bikini (in the 1983 Return of the Jedi) usually figures prominently in these accounts, and why shouldn’t it? She looked amazing. But my first encounter with Star Wars didn’t change my life at all. I was a teenager at the time, more interested in disco and glam rock and top-40 radio than in an imaginary space universe concocted by a filmmaker who was frustrated because he couldn’t get the rights to Flash Gordon. But because everybody was talking about Star Wars, I went with a few friends. We had a good time. Most of it we could take or leave—but we all loved Ford’s Han Solo.

You could call him a caricature of a man’s man, a restless rogue who couldn’t be tied down, a gearhead too preoccupied with his wheels, a.k.a. the Millennium Falcon, to pay much attention to womenfolk. But all of the original Star Wars characters are caricatures; what made them so appealing (and so enduring) is what the actors did with them. Ford, though he’d appeared in Lucas’ American Graffiti and Francis Ford Coppola’s The Conversation, was a new face, handsome as the devil without ever being ingratiating. His lazy half-smile was like the clue to an inside joke, perhaps a dirty one. You couldn’t put anything over on him, which made you desperately wish you could have the opportunity to try.

At 73, Ford hasn’t lost that quality, and his presence is the best feature of The Force Awakens. In George Lucas’ manchild world, his Han Solo never came off as less than a grownup. And now, in a new vision of that world that gives millions of moviegoers a chance to fetishize their childhood obsessions, he’s still a grownup, his dignity refreshingly intact. The Star Wars saga is commonly, and rightly, referred to as a space opera, a term that’s been used since the 1930s to describe a specific genre of melodramatic, pulpy science fiction. But Han Solo’s death in The Force Awakens isn’t operatic at all, and I can’t help feeling that this character deserves better. I’m not in the right age group to view The Force Awakens as a chance to revisit the joys of my childhood. On the contrary, when Han Solo died, I think a little bit of my teenage self died with him—but that happened in my dreams. It had nothing to do with what I saw on the screen.

Review: The Force Awakens Is Everything You Could Hope for in a Star Wars Movie—and Less 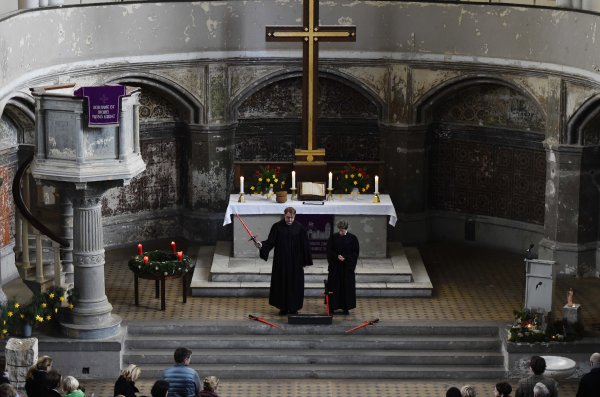