Ewan McGregor and Frank Oz reprise their iconic Star Wars roles during a scene in The Force Awakens that also brings back the voice of the late Alec Guinness.

The familiar voices can be heard during a flashback vision sequence, director J.J. Abrams told Entertainment Weekly. McGregor portrays Obi-Wan Kenobi in the Star Wars prequels, while Oz is known for being the well-known voice of Yoda. Guinness played Obi-Wan in George Lucas’s original Star Wars trilogy before he died in 2000.

“You do hear a little bit of Yoda. You hear Luke yelling out, ‘Nooo!’ from that moment in Empire. And you hear Obi-Wan at the end say, ‘Rey … these are your first steps,’” Abrams told EW.

The scene takes place midway through the movie during Rey’s dreamlike flashback.

“The idea of the voices was, we wanted the audience to feel – but not necessarily be presented right in your face — this idea that familiar, Force-strong voices were connecting with her. At least as well as they could,” Abrams said.

“Here’s the cool part,” he added. “We asked Ewan McGregor to come in and do the line. And he was awesome and we were very grateful. He was incredibly sweet and handsome, and all that stuff. Then he rode off on his motorcycle. Literally the coolest voice-over actor ever.” 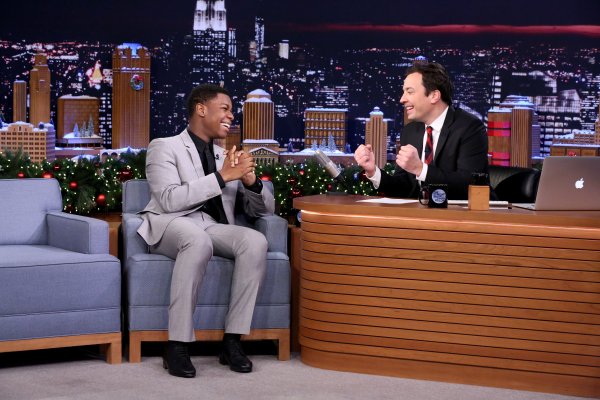