Lindsey Graham: I Would Compromise if Clinton Won

Sen. Lindsey Graham would work with Hillary Clinton on a range of issues if she became president in exchange for concessions on fighting the Islamic State of Iraq and Syria.

The South Carolina Senator, who is trailing in polls of the Republican presidential field, told TIME after a town hall meeting in Londonderry, N.H., that he would give a hypothetical President Clinton “political cover” on other issues if she fought ISIS.

“If she’s willing to be more robust in terms of destroying ISIL, I’d give her political cover,” Graham said. “If she wanted to be more muscular in her foreign policy, I would try to help her.”

Graham said he could imagine a relationship with Clinton similar to the one between Tip O’Neill, the Democratic speaker of the House of Representatives, and President Reagan, who worked together on legislation. He said he would help Clinton on immigration, budget reform and defeating ISIS.

“Would she do something like Simpson-Bowles?” Graham said, referring to a bipartisan plan commissioned by the Obama Administration to reduce the federal deficit. “If she would be willing to do it, I’d be willing to play the part of, me and my colleagues, being Tip O’Neill.”

“If she’s willing to fix immigration, I’m willing to help her,” Graham continued.

That said, Graham was clear that he opposes Clinton’s bid for president. “I don’t want her to be president. I’ll do everything I can to beat her,” Graham said. But, he added, “if she’s president, I will work with her.”

Graham’s comments were unusual for a presidential candidate, particularly in the 2016 cycle.

Clinton has served as a kind of punching bag for the entire field of Republican presidential candidates, from Donald Trump to former Florida Gov. Jeb Bush, Sen. Marco Rubio and Sen. Ted Cruz. Graham’s emphatic support for bipartisan compromise is an exception to much of the tone this year, from both the Democrats and the Republicans.

Graham is one of the most vocal hawks in the Senate as well as the GOP field. He has called repeatedly for 10,000 ground troops to defeat ISIS, citing his time in the Air Force and his experience on the Senate committee on Armed Services among his national security credentials. “If you withdraw from the world, they’re coming here,” Graham said during the town hall of fighting ISIS.

Although he is a notable player in the Senate on foreign policy, Graham is polling at around just 1% nationally among Republicans, overshadowed by less compromising candidates like Texas Sen. Ted Cruz and real estate mogul Donald Trump. As Senator, Graham was one of the so-called “Gang of Eight” that drafted bipartisan legislation to overhaul the immigration system. 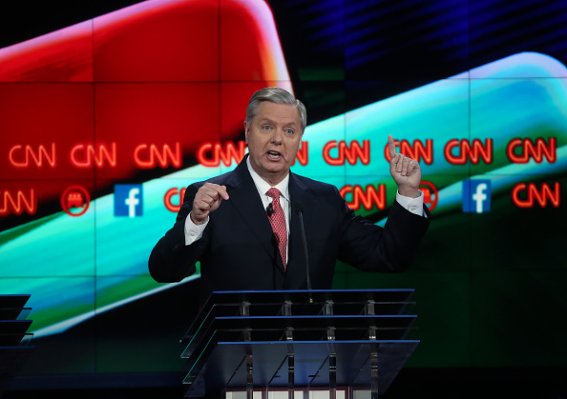 Lindsey Graham Turns The Princess Bride Into Debate Point
Next Up: Editor's Pick