Former Secretary of State Hillary Clinton says she would probably still pick the flowers and china for state dinners if she were to be elected president, just like she did as First Lady in the 1990s.

“I’m probably going to pick the flowers and the china for state dinners,” she said. But she said she would “turn to him as prior presidents have” for advice.

During a lighter point in Saturday’s debate, the former First Lady addressed a question that lingers in the back of many voters’ minds during the campaign: Who would take on the role as First Lady if a woman is elected president?

Clinton, who held the exclusive position for eight years while her husband served as president, said the role of First Lady has been “defined by each person who’s held it.” Each, she said, “not only did what she could to support her husband and this country” but also to promote causes she felt were important.

Senator Bernie Sanders praised Clinton for her work while First Lady. She “not only did an extraordinary job” the Vermont Senator said, but she “redefined what that role could be.” 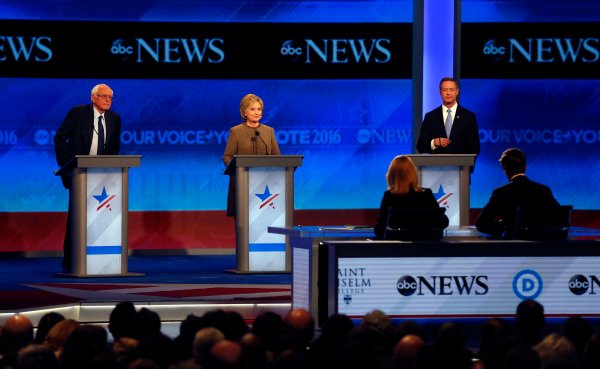 Vote Now: Who Won the Third Democratic Presidential Debate?
Next Up: Editor's Pick