Bernie Sanders had a message to Donald Trump supporters at Saturday’s Democratic debate.

The Vermont Senator said the billionaire Republican doesn’t have the best interests of his supporters at heart. When answering a question about profiling, Sanders veered off to address what he sees as a xenophobic tone to the Trump campaign that plays off the fears of his supporters.

Read More: Democrats Clash in the Final Debate of 2015

“So what I say to those people that go to Donald Trump’s rallies: understand, he thinks a low minimum wage in America is a good idea,” Sanders said during the debate in New Hampshire. “I believe we stand together to address the real issues facing this country, not allow them to divide us by race or where we come from. Let’s create a country that works for all of us, not the handful on top.”

Sanders added that fear is at a high in the country after the terrorist attacks in Paris and San Bernardino. “What you have now is a very dangerous moment in American history,” Sanders said. “Our people are fearful, they are anxious on a number of levels. They are anxious about international terrorism and the possibility of another attack in America.”

He pointed to Trump’s comments about Mexicans and Muslims, which the billionaire has been under fire for, as the wrong way to calm those fears: “Somebody like a Trump comes along and says: ‘I know the answers! The answer is that all of the Mexicans, they’re criminals and rapists. We gotta hate the Mexicans, those are your enemies. We hate all the Muslims, because all the Muslims are terrorists, we gotta hate the Muslims.’ Meanwhile the rich get richer and the poor get poorer.” 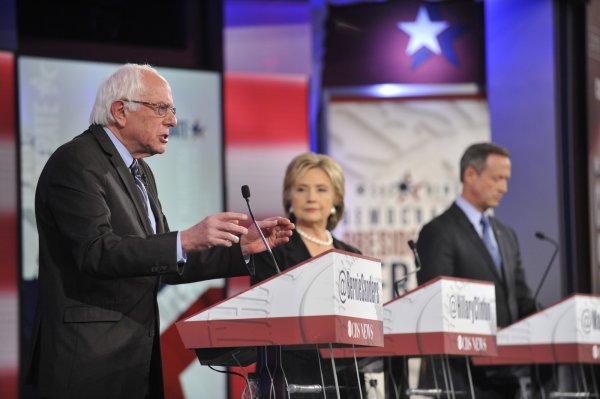