Photograph by Erik Madigan Heck for TIME
By Sam Lansky

When her new album 25 was released on Nov. 18, Adele shattered countless sales records—most significantly, she notched the biggest first-week sales on record when she sold a jaw-dropping 3.38 million copies in the United States. But ask her how she did it and she’s absolutely baffled. “It’s a bit ridiculous,” she says, reclined on the floor of her New York City hotel room on a chilly winter day. “I’m not even from America.” She sets down her cup of tea, brightening. “Maybe they think I’m related to the Queen. Americans are obsessed with the royal family.”

In a series of interviews with TIME (for more, see the issue on stands Dec. 21), Adele opens up about streaming, motherhood and why she doesn’t think of herself as a brand.

She’s not sure why she’s so phenomenally successful, but she has an idea.

Why do so many people respond to Adele’s songs? “The fact that I’m not shy or embarrassed to be falling apart,” she says when asked. “Everyone falls apart, I think. A lot of people try to be brave and not shed a tear. Sometimes when you know someone else feels as s— as you do, or approaches things in a certain way just like you do, it makes you feel better about yourself. Even though my music is melancholy, there’s also joy in that. I hope I do bring joy to people’s lives, and not just sadness, but I think there’s there’s a comfort in it. But I honestly don’t know. If I knew, I would bottle it, and sell it to everyone else.”

She thinks artists should be a “package,” not a “brand.”

While personal branding has become an integral part of being a recording artist, Adele dislikes industry jargon. “I don’t like that word,” she says of “brand.” “It makes me sound like a fabric softener, or a packet of crisps. I’m not that. But there’s personality in an artist, and if you’re expecting people to let you in and give themselves to you, you have to be a whole package. I feel like some artists—and this isn’t shading any artist, just me trying to come up with my own explanation—the bigger they get, the more horrible they get, and the more unlikable. And I don’t care if you make an amazing album—if I don’t like you, I ain’t getting your record. I don’t want you being played in my house if I think you’re a bastard.”

Motherhood has changed her, a lot.

Releasing the biggest album of the year comes along with a demanding promotional schedule, but Adele says having her son Angelo, 3, along for the ride actually helped. “The other day I was saying, ‘Oh God, I’m finding this really hard again with a kid,'” she says. “I have no time for myself because in between doing this, all my spare time is with him. But then I realized, he’s been keeping me totally cool and calm about the whole thing.”

She explains that motherhood has made her feel more purposeful than ever before: “He makes me so proud of myself, and he makes me like myself so much. And I’ve always liked myself. I’ve never not liked myself. I don’t have hangups like that. But I’m so proud of myself that I made him in my belly. Cooked him in my belly and then he came out of me! This human who’s suddenly walking around and doing his own thing. I can’t wait to know who his best friends are going to be, who his girlfriend or his boyfriend is going to be or what movies he likes… Whatever my kid wants to do or be I will always support him no matter what.”

That said, she wants him to stay as grounded as possible—just like her.

Adele insists that her life with Angelo and her boyfriend Simon Konecki in London is very normal. “It’s as normal a life as I can have,” she says. “I think people would be pretty surprised. When I’m not doing a photo shoot, it’s just me, my boyfriend and the baby.” For her, it’s imperative that she doesn’t get consumed by fame. “I think it’s really important so that you don’t get f—ed up by everything,” she says. “It’s important so you stay in touch with yourself. If you lose touch with yourself, no one’s going to want to talk to you or listen to anything you’re f—ing doing. They’ll just point at you and laugh. At you, not with you.”

That informs her parenting, too. “I’m very self-conscious that I have a kid, and I don’t want him being one of those dickheads, who grows up being, like, ‘Driver, driver!'” She snaps her fingers. “I have no clean clothes! Well, have you washed them? I really don’t want him growing up like that. I’m very conscious of it.”

Outside her lyrics, though, her family is not fair game. Accordingly, she’s deeply protective over them.

Just because Adele is fairly intimate in her songwriting doesn’t mean that the people in her life are fair game. “My record is about my real life, so I have to talk about it,” she says. “If you try to intrude or come near my family, I’m a lioness. Especially because my boyfriend isn’t famous. So I think it’s really unfair for anyone to want unlimited access to my family when we’re not a brand. Some people do, and if you’re happy to do it, then kudos—that’s f—ing great. But I don’t want my family to be part of my package. If my kid decides that when he’s old enough to make his own decision that he wants to be known for being my kid, I’ll be annoyed, but I won’t stop him. I’ll be like, ‘It’s your choice now.’ But this was my dream. This isn’t theirs.”

As she’s gotten older, Adele says, she’s begun to let go of some of the self-doubt and anxiety that was part of her experience in her early 20s. She gives an example: “I feel uncomfortable being famous,” she says. “How long should I feel like that? Because if you’re going to keep making music, there’s a 50-50 chance you’re going to be famous for the next 20 years. So do you want to be uncomfortable for 20 years, or do you want to just settle into it? I don’t want to have plastic surgery. I’m going to look like this forever. Deal with it. Once you deal with it, you feel more calm about it.”

Just because there are no duets on this album doesn’t mean there won’t be one on the next.

When asked about the rumors that she turned down the opportunity to do a duet with Beyoncé for 25, Adele cackles. “Whoever started that rumor must have been having a laugh because anyone who knows me knows that my main priority in life outside of my child is Beyoncé,” she says. “I really wanted to do a duet on this album. I spoke to someone about it who I wanted to do it with, and we got on like a house on fire, and then we just couldn’t logistically really get it to work. I can’t say who it is because I want to do it in the future. That’s the only reason. It wasn’t Beyoncé!”

She’d consider acting–but only if it was with her “Hello” video director Xavier Dolan.

Dolan, she notes, was the one who insisted that she use a flip phone in the video for “Hello,” which went on to spawn a thousand memes—but she says the experience of working with him was so special she’d be game to do it again. “I’ve been pretty spoiled with him,” she says. “He just knows what he’s doing. I have no interest in acting for the foreseeable future, at all, especially while I’m doing my music, because I can’t give my all into two things, but I would consider it for him. I liked how he made me feel when I was doing it. So I’d do it for him.”

She had to cut out social media in order to write her album.

Although Adele approves everything that goes out on her social platforms, she doesn’t manage them herself. It’s part of keeping herself free from distraction so she can create high-quality work. “Privacy is key to being able to write a real record, whether people like it or not,” she says. “My life has changed so much, but I’ve made the realest record I can make, and it’s the real part of me. How am I supposed to write a real record if I’m waiting for half a million likes on a f—ing photo? That ain’t real.”

She thinks some artists are overexposed.

In an era where every bit of information about a recording artist’s campaign is carefully meted out to drum up interest for fans, Adele thinks that’s diluting the impact of the music. “I’m not throwing shade at anybody,” she says, “but when you have a six-month build up, don’t expect me to be there the day your album comes out, because I’m bored. It doesn’t matter how amazing it is. You put seven songs out. I’ve heard the album. I’ve heard everything you want to say about it. I’ve heard it all over radio. Don’t expect me to not lose interest before it’s even happened.”

She has grand ambitions for her upcoming tour.

Though Adele’s concerts tend to be pretty dignified affairs, she plans to kick it up a level for her upcoming world tour. “I’m not just going to stand there!” she laughs. “I really would like to fly through the arena for the beginning, but no one’s having it.”

For more on Adele, pick up the issue of TIME on stands Dec. 21. 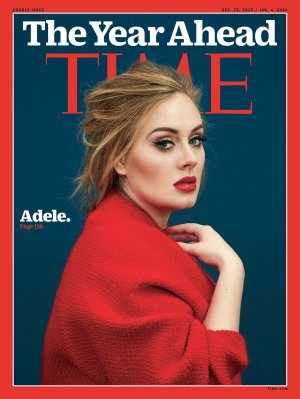 Adele Talks Decision To Reject Streaming Her New Album
Next Up: Editor's Pick