Hillary Clinton faced an onslaught of criticism from her rivals for the Democratic presidential nomination during Saturday evening’s debate, but neither Bernie Sanders nor Martin O’Malley delivered an attack that seemed likely to derail her frontrunner campaign.

The challenges came on a wide range of topics, from her Wall Street ties and initial support for invading Iraq to her positions on gun control and age. She parried all comers, without losing her composure or committing major errors.

“Maybe we can score some political points,” Clinton said of her rivals’ tough words. Instead, she focused her harshest words on Republicans, including GOP frontrunner Donald Trump, as part of a strategy to show Democratic voters that she is already ready for the general election next year.

O’Malley tried to inject himself repeatedly, picking up on the theme begun by Sabders. In doing so, he made note of the age of both Clinton and O’Malley. “Can I offer a different generation’s perspective?” O’Malley said. Later he added, “We need new leadership.”

O’Malley was the more aggressive Clinton critic, taking on her support from Wall Street donors and her positions on the Second Amendment. “Secretary Clinton changes her position on this every election year it seems,” O’Malley said in criticizing Clinton’s record on gun rights.

Clinton braced herself against the jabs, noting that she would get “all kinds of comments” from her rival. When O’Malley swung at Clinton’s record on gun rights, Clinton kept her composure. “I applaud his record,” she said, before adding: “I just wish he wouldn’t misrepresent mine.” She then noted that, as head of the Democratic Governors Association, O’Malley courted Wall Street donors himself.

Sanders began the debate on the defensive over his campaign’s improper access to Clinton’s voter database. Sanders apologized to rival Clinton and sought to move past the drama that roiled their party for the last three days. “Yes. I apologize,” Sanders said. “Not only do I apologize to Secretary Clinton. I want to apologize to my supporters. This is not the type of campaign that we run.”

Sanders, however, continued to blame the Democratic National Committee and its data contractor. “There was a breach because the DNC vendor screwed up,” Sanders said. Clinton accepted the apology. “Obviously, we were distressed when we learned of it,” Clinton said, pointing to “tens of thousands of volunteers” who have worked to enter data.

She then returned a favor to Sanders, who famously used his first debate with Clinton to shut down questions about her use of a private email server. “We should move on because I don’t think the American people are all that interested in this,” she said.

Apart from the debate’s dramatic first question on the DNC data breach, the debate’s first portion was an otherwise predictable affair. Clinton faced criticism from her rivals, Sanders used every question to rally his progressive supporters and O’Malley struggled to inject himself into the conversation. The Saturday night debate was unlikely to change the contours of the Democratic contest, which so far has favored Clinton.

Trump was not on stage, but he was a favorite target for the Democrats. “Mr. Trump has a great capacity to use bluster and bigotry to inflame people,” Clinton said. She said “he is becoming ISIS’s best recruiter.” Added Sanders: “He thinks a low minimum wage in America is a good idea.” And O’Malley called him “as untried and as (he is) incompetent.” 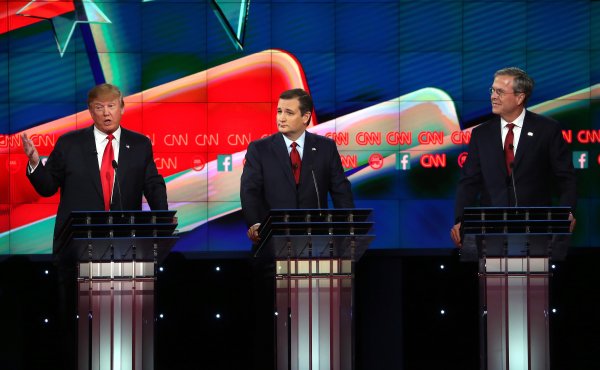 The Republican Debate Was the 3rd Most-watched Ever
Next Up: Editor's Pick