Memo to Kylo Ren, Re: Your Parents

ALERT: THIS MEMO CONTAINS SPOILERS. DO NOT READ THIS UNLESS YOU
(A) HAVE NO DESIRE TO BE SURPRISED IN THE NEW STAR WARS MOVIE OR
(B) ARE KYLO REN

To: Kylo Ren
From: Concerned Star Wars Fan
Re: Your Parents

First, welcome to the franchise. It’s always nice to see some new faces and masks in the Star Wars family. Your all-black man-gown makes a striking addition to the landscape and provides dramatic contrast to the Stormtroopers’ four-season whites.

However, I’m a little concerned, judging from your behavior, that you might have missed a few key truths about the world you’re now inhabiting. As someone who has spent a lot of time watching events unfold there, let me fill you in.

First, your dad. I get it. To you he’s probably just the guy who bickered constantly with your mom and ultimately preferred smuggling contraband across the galaxy in the company of an 8-foot-tall walking carpet to being with you guys. But you’ve gotta know: your dad is the cool dad. He wore skinny jeans before anyone else. He could fix a hyperdrive by banging on it. When princesses declared their love for him, he just said, “I know,” because obviously. He was so cool he could literally be frozen in carbonite and still be the hottest guy in the room. Maybe you think his ship is embarrassing? That is the Millennium Falcon, Kylo. It’s the ship that made the Kessel Run in less than 12 parsecs. Have some respect.

Look, I understand how it is sometimes, when sons are estranged from their fathers. It has happened in this universe before. But you should be trying to redeem your father, not acting out about him. Your behavior is driving a wedge between your parents, when you could actually help unite them if you’d just drop the mask and answer to the nice name they gave you instead of your pretentious two-part moniker. I’m not saying you caused their breakup, although losing a child is an extremely hard thing for a couple to bounce back from. But of course I wasn’t there. I just think you could be a little more considerate toward the people who brought you into the world.

Your namesake, by the way: he was a top-flight guy. He did not need a fancy three-pronged light saber to make a statement. All he needed was a plain light saber and an English accent. But instead of following his glowing example, you dredge up the half-melted mask of your grandfather. Here’s the thing: invoking your grandfather to inspire you to be dark shows an utter lack of understanding of his character. There was goodness in him. I felt it. We all felt it. Maybe you had to be there, but I’m telling you, it was not a trap.

I know it’s hard for your generation. You’re trying to do your own thing, and you’ve always been told you’re special. Of course you throw tantrums when things don’t go your way. But hiding behind a mask isn’t going to make things better. Nor is picking on girls who may or may not be related to you. You’re young, and you have a lot to learn about the ways of the Force. Frankly, I’m not sure who can get through to you. At this point, your mother is my only hope. 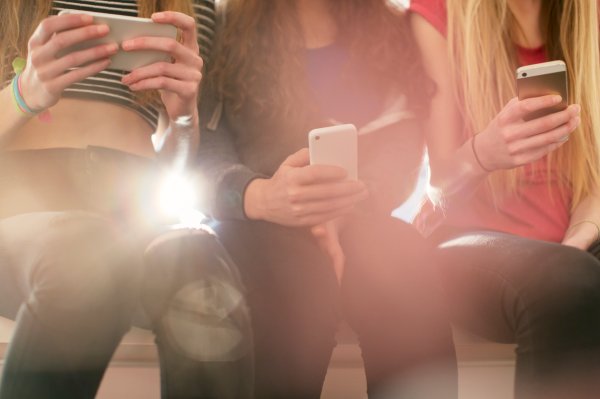 3 Things to Consider Before Buying Your Kid a Cellphone this Holiday
Next Up: Editor's Pick