Mandy Patinkin: The Real Politics in The Princess Bride

When I first heard that Republican presidential candidate Ted Cruz was quoting The Princess Bride, I found it amusing and kind of stunning. Then I saw the extent to which he was quoting almost every line in the movie, and a friend sent me a photograph of myself as Inigo Montoya with Cruz’s face superimposed over mine. I’m concerned that Cruz is using the film as a political tool. I don’t think it’s appropriate. And I’m worried not about what Ted Cruz quotes from the movie—but about what he’s missing.

I was 34 when we made The Princess Bride in 1987, but I didn’t realize its true message until almost 10 years ago. At the time, I was in Philadelphia doing a show with Patti LuPone, and I was working out at the hotel gym, where the movie was playing silently on the TV. When I went back up to my room, my wife had it on too.

It was near the end of the movie when the Man in Black is standing at the window with Inigo, and Robin Wright, who played the princess, jumps out the window into Andre the Giant’s arms. Inigo says to the Man in Black: “You know, it’s very strange. I have been in the revenge business so long, now that it’s over, I don’t know what to do with the rest of my life.”

And that line just sung to me that night. I heard it in a way that the 34-year-old Mandy never heard those words. But the 55-year-old Mandy heard them loud and clear. I find it ironic that everyone who quotes the movie never quotes that line. It’s the most important line that William Goldman wrote in the whole film.

I love the idea of giving up the vengeful nature that so many of us have. Too often we think that when we have a problem with our lives or our country that the way to fix it is to take an eye for an eye. That doesn’t help anything or anyone. Violence only perpetrates more violence, and it becomes a vicious cycle. There are political situations all over the world where there are untold acts of revenge for incidences, and thousands and thousands of lives are lost because of them. Not acting in a vengeful manner is a much brighter road to a peaceful existence.

Inigo Montoya spent his life trying to avenge the murder of his father. He found the six-fingered man, and he killed him. But he realized that that did not bring his father back. It didn’t do any good. Inigo realized that he might have made a different choice to do something else with his life. If they ever did a sequel, you would see all the good he has done for the world.

Ted Cruz, who uses phrases like “carpet-bombing” the people of ISIS and who said, after the incidents in Paris, that we need a war president, is using fear mongering and hate speech. As a citizen of the world, I’m very concerned that this kind of behavior is being cheered on by anyone. It only brings more pain and suffering.

My wife, Kathryn Grody, has taught the men of our family—my two sons, Isaac and Gideon, and me—a phrase that has become one of the mantras of our family: “Hurt people hurt people.” In my opinion, someone who thinks like Ted Cruz does has been hurt some time in his life, and believes that the only way to heal that hurt is to hurt others. And I’m certain that that is not the way to heal a wound.

We need to learn to accept and certainly mourn any harm that comes to any human being on this earth. But we also need to not be vengeful. We need to find ways to be hopeful and welcoming and caring toward our fellow man, not to shut the doors, as certain governors have done, to refugees who are fleeing horrific violence, who have spent years trying to save their children’s lives, risking them by putting them in rafts to get to safety. You would never put your child in a boat like that if you had an alternative.

Refugees come to us seeking asylum, seeking freedom, justice and dignity—seeking a chance just to breathe. And people in our country are saying close the doors and don’t let them in?

When I visited Greece in November, I met this extraordinary couple who had lived through hell during the Syrian war. Fleeing ISIS for the Turkish border with their two children, the wife said she saw death behind her and life in front of her. I know those same words have been spoken in Yiddish and Hebrew and Italian and German and Irish and by many in America—other than those who were brought here by slavery. America is a country that has opened its arms to humanity.

I asked the couple: “Are you afraid of anything?” And they said to me: “We’re afraid of nothing.” If they can live without fear, we, who haven’t experienced that hell, can be a little less afraid and a little more courageous. We must help the refugees that come to this country, listen to their stories, and welcome them.

I’m not saying for a second that we don’t need to keep our defenses up. But we must also keep our humanity up. People forget to keep their humanity up to an equal degree as their defenses. If you have no humanity, there is nothing to defend.

Playing CIA agent Saul Berenson on Homeland, I’ve had the privilege of meeting many people who work to ensure our security. They are very good at what they do, and they’re going to get better. They’re doing the best that they can, but they’re human beings, and there are going to be mistakes.

People are scared—of course they are. No one wants anyone they know in the world to suffer. But we can’t be naïve. If you don’t think dangerous people are already here, you need to think again. Since 9/11 there hasn’t been a single act of terrorism committed by a refugee in the U.S. Instead we have homegrown terrorists infected by the Internet, which is a whole new playing ground for revenge and war and insane acts by human beings. Those acts are not going to go away.

When Saul in the Fourth Season of Homeland is ready to kill himself instead of be traded for a group of terrorists who were going to get out of prison and do more terrible things, he learns that he’s seen the enemy, and it’s himself. We are the enemy if we think that violence and hate is our only way, and if we don’t have compassion and empathy for what is pushing people to commit such horrific acts of violence. I decided Saul would keep a reminder on his desk wherever he is: “Take one life and it’s as though you’ve destroyed the entire world. Save one life and it’s as though you’ve saved the entire world.”

We have to look at facts. We have to realize some of the things candidates are saying are based on falsehoods. This is a terrible, terrible misuse of a presidential election. All for the sake of politics, many are revving up a selling tool to get themselves elected, a tool that has been tried and true over the years: fear. It’s not the way for us to be.

Rob Reiner once summed up The Princess Bride: “It’s about a little boy who is sick in Evanston, Illinois, and his grandfather comes over to read him a story to tell him the most important thing in life is true love.”

Every character in that movie is looking to be loved. I’m sure Ted Cruz wants to be loved. I know Donald Trump does. Everyone wants it. But we mustn’t look for love by spreading hate.

I encourage us to remember that line at the end of the film and say it as often as we say the other lines in the movie. We must learn from this day forward what to do with the rest of our lives. Let it be an act of humanity, not revenge. 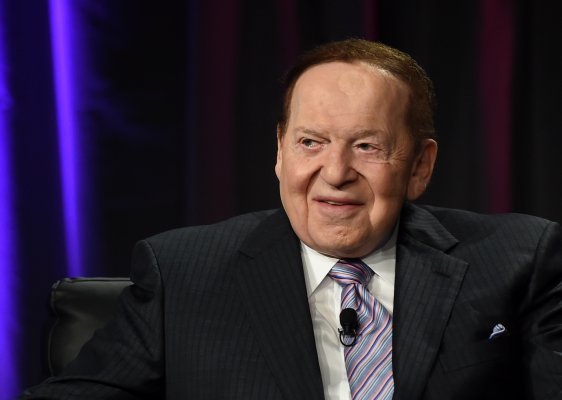