The fisherman who famously survived 14 months at sea is being sued for $1 million by the family of his crewmate, who accuse him of eating their relative in order to survive.

Jose Salvador Alvarenga, 36, is the only man known to have survived for more than a year at sea. In November 2012, he set out from Tapachula, Mexico, for a two-day fishing trip with 22-year-old Ezequiel Cordoba.

When he washed up 438 days later to the southernmost tip of the Marshall Islands, he was alone.

He told officials that fierce winds blew his 25-foot boat off course, killing the engine, knocking out the communications system and leaving the pair at the mercy of the waves.

The two men survived for months by catching fish and birds with their bare hands and drinking turtle blood, urine and rainwater. “I was so hungry that I was eating my own fingernails, swallowing all the little pieces,” Alvarenga told The Guardian.

After two months at sea, Cordoba entered a mental and physical decline and began to refuse all food. Alvarenga recalled to The Guardian how he promised his crewmate that if he survived he’d find Cordoba’s mother in Chiapas, Mexico, and deliver her son’s goodbye.

After Cordoba’s death, Alvarenga said he kept the man’s corpse in the boat for nearly a week, talking to it as if he were still alive. Finally, after the sixth day, he prepared Cordoba’s corpse and pushed the young man’s body overboard.

“As I slid him into the water, I fainted,” he recalled.

After his incredible feat of reaching the Marshall Islands, Alvarenga kept his promise and visited Cordoba’s mother, Rosalia Diaz Cueto, to deliver the message from her son.

In February, Diaz Cueto told reporters that she did not blame Alvarenga for Cordoba’s death. “I want it understood that I am not blaming this person, Alvarenga, nor am I declaring him guilty of anything,” she said, according to the Associated Press.

Now, the family is demanding $1 million in compensation from Alvarenga, alleging that their son was the victim of cannibalism.

Alvarenga’s lawyer denies the allegation, pointing out that the lawsuit came just days after a book about his client’s ordeal was published.

“I believe that this demand is part of the pressure from this family to divide the proceeds of royalties,” he told El Salvador’s El Diario de Hoy. “Many believe the book is making my client a rich man, but what he will earn is much less than people think.”

Alvarenga is also being sued by a former attorney, Benedicto Perlera, who is seeking $1 million over an alleged breach of contract, according to El Diario de Hoy. 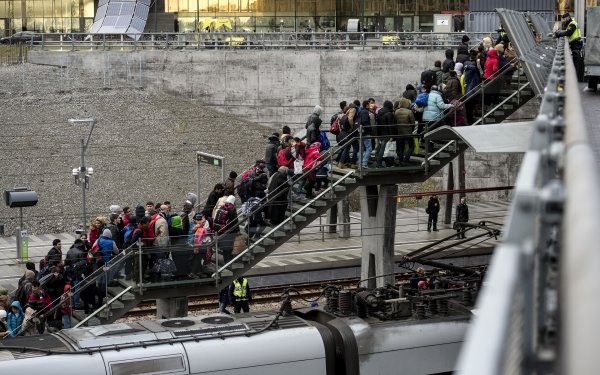 Denmark May Take Valuables From Refugees
Next Up: Editor's Pick