Congress Party president Sonia Gandhi and the party's vice president Rahul Gandhi after their protest against the suspension of their 25 members by the Lok Sabha Speaker at Parliament complex on Aug. 4, 2015, in New Delhi
Sonu Mehta
By Rishi Iyengar

Sonia Gandhi, the head of India’s main opposition Congress Party, will appear in court in New Delhi on Saturday, along with her son and party vice president Rahul, in a controversial case that has brought the country’s Parliament to a complete standstill, the Indian Express reports.

The National Herald case, as it has come to be known, is based on allegations in 2012 by Indian politician Subramanian Swamy that the Gandhis — part of a political dynasty that includes India’s first Prime Minister Jawaharlal Nehru and his daughter Indira Gandhi — siphoned close to $300 million into their personal coffers through the purchase of a nonprofit company founded by Nehru that published the now defunct National Herald newspaper.

That company, Associated Journals Ltd. (AJL), had been granted an interest-free loan exceeding $135 million by the Congress Party, which was written off for a mere $75,000 when AJL was sold to a company called Young Indian, allegedly owned by Sonia and Rahul Gandhi, in 2010, the Express says.

Swamy alleged that the mother-son duo engineered the deal in order to gain control of the many lucrative properties owned by the publishers of the Herald.

The Congress Party has slammed Swamy’s claims, with Rahul Gandhi calling them a “political vendetta,” according to the Express.

The party has been paralyzing the upper house of Parliament — where Prime Minister Narendra Modi and his ruling Bharatiya Janata Party (BJP) are battling to pass major economic reforms — with protests. However, it looks to be adopting a more tempered approach in the lead-up to the Gandhis’ court appearance, with a massive protest by party workers scheduled for Saturday being called off. Instead, several members of Parliament will accompany Sonia and Rahul to court.

“The Congress president and the vice president have complete faith in the judicial process,” the party’s chief spokesperson said. “We respect judicial process and we will submit ourselves to the majesty of the court process.”

The party has not indicated whether the Gandhis will apply for bail, the Press Trust of India news agency reported. 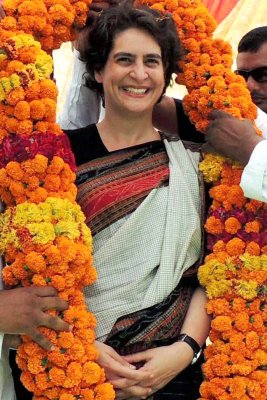