These are TIME's Most Anticipated Movies of 2016

Let’s face it: January’s notoriously bad for movies. Maybe curl up with a book instead?

The Coen brothers’ next movie takes place during the Golden Age of Hollywood, with a movie studio executive (Josh Brolin) freaking out when his biggest star (George Clooney) gets kidnapped by…the future. Usual suspects Tilda Swinton and Frances McDormand are featured, with the cast rounded out by Scarlett Johansson, Ralph Fiennes, Jonah Hill and Channing Tatum.

After 15 years, Derek Zoolander (Ben Stiller) and Hansel McDonald (Owen Wilson) return, this time on a mission to prevent the assassinations of music’s brightest stars. If you don’t want to see Justin Bieber’s Blue Steel, this movie is not for you.

The eighth installment of the X-Men series promises to be Marvel’s raunchiest, bawdiest movie yet, with Ryan Reynolds as a different kind of superhero. His face may be disfigured but his sense of humor is woefully intact. (See the red-band trailer here.)

Relative newcomer Stephan James stars in this biopic about track and field Olympic gold medalist Jesse Owens, which centers on his experience training for and participating in the 1936 Berlin Olympic Games.

Tina Fey’s next movie is a black comedy adapted from journalist Kim Barker’s 2011 memoir The Taliban Shuffle. Fey plays Barker, a journalist stationed in Pakistan and Afghanistan during the first decade of the 2000s, immersed as much in active battle scenes as she is in the ex-pat social (read: hook-up) scene.

March 11: Hello My Name is Doris

In her first leading role in years, Sally Field plays a sixty-something single woman who falls for her much younger, super hunky co-worker (Max Greenfield). The film is co-written and directed by Michael Showalter, best known for co-writing and starring in the cult comedy Wet Hot American Summer.

Colin Farrell and Rachel Weisz star in this tale of a dystopian society, in which single folk have 45 days to find a mate or else be turned into an animal. Singledom has never looked so hilariously frightening.

We’re still waiting on a trailer for Keegan-Michael Key and Jordan Peele’s first movie together—which revolves around a plot to recover a stolen cat—but if five seasons of their Comedy Central sketch show Key & Peele are any indication, it stands a very good chance of being hilarious.

Avengers: Age of Ultron was the sixth highest grossing film of all time. Cap’s third solo outing follows up on that film’s universe-changing story. It’s going to be huge.

Though his most recent achievements include an impeccable Janet Jackson lip-sync and an adorable Yoda costume for the Star Wars premiere, Joseph Gordon-Levitt also has serious acting chops, which he puts to use in this portrayal of Edward Snowden (presumably, at least—the teaser is very much a tease).

Disney/Pixar’s most forgetful fish returns (along with her voice, which belongs to Ellen DeGeneres) for the sequel to 2003’s much beloved Finding Nemo. The animated film finds Dory on a journey to find her long-lost family.

Twenty years after the human race narrowly escaped destruction by aliens in Independence Day, they have to do it all over again. Stars Jeff Goldblum and Bill Pullman return to (try to) save the day.

July 1: The Legend of Tarzan

Alexander Skarsgård swings on jungle vines, chills with apes and is super jacked. Margot Robbie plays Jane, Samuel L. Jackson is a stately politician and Christoph Waltz plays evil, as is his wont.

The Roald Dahl classic about a big, friendly giant gets its movie adaptation (joining such gems as Matilda and Fantastic Mr. Fox) with Steven Spielberg at the helm and Mark Rylance as the giant.

No trailer has been released for Paul Feig’s reboot of the 1984 classic, though character posters released last week offered a taste of what can be expected when Kristen Wiig, Melissa McCarthy, Leslie Jones and Kate McKinnon join forces to bust ghosts.

Fast and Furious director Justin Lin takes the helm from J.J. Abrams for the third installment of the reboot of the film franchise based on the TV show (hey, when it works, it works). This installment finds Spock and company stranded without a crew or a ship.

In addition to Batman v. Superman, DC Comics’ other big bet for 2016 is the highly-anticipated, star-studded movie about a gang of antiheroes who escape from jail to perform covert operations for the government.

Were we OK leaving the Bridget Jones series just as it was? Yes. Was the first one so delightful that we’ll consider allowing another? Yes. (No trailer yet for this one.)

This heist comedy, with an all-star comic cast of Zach Galifianakis, Kristen Wiig, Jason Sudeikis and Owen Wilson, was delayed from its 2015 release date when its production company went bankrupt. But hopefully, with a cast like that, it will be worth the wait.

There’s no trailer yet for this adaptation of Paula Hawkins’ thriller, released in early 2015, but considering the book’s status as an instant, massive bestseller, the movie could attract an audience in much the same way as 2014’s Gone Girl. Emily Blunt, Rebecca Ferguson and Justin Theroux are set to star.

Nov. 18: Fantastic Beasts and Where to Find Them

This prequel to the Harry Potter series, starring Eddie Redmayne as a “magizoologist” in 1920s New York, has muggles everywhere counting the days ’til next November.

Disney found the voice of its next star by auditioning hundreds of young women from the Pacific Islands. Ultimately, the part went to 14-year-old Hawaii native Auli’i Cravalho, who will play a teenage Polynesian princess in search of a fabled island.

This Star Wars spinoff, which is set between Episodes III and IV of the series, tells the story of a band of resistance fighters who come together to steal the Death Star plans. It stars Forest Whitaker, Felicity Jones, Diego Luna, Riz Ahmed, Jiang Wen and Donnie Yen, and does not yet have a trailer.

Two of Hollywood’s biggest stars, Jennifer Lawrence and Chris Pratt, costar in this sci-fi romance, about which little is known (other than Lawrence’s recent discussion of what it was like filming her first movie sex scene). At the very least, it should tide Lawrence fans over until the movie she’s co-writing with new BFF Amy Schumer is released. 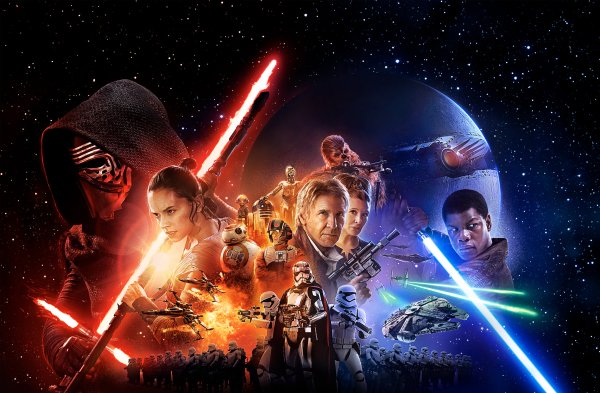 The Problem With That Major Force Awakens Scene
Next Up: Editor's Pick