Saudi women leave a polling station after casting their votes in the Kingdom's municipal elections, in Riyadh, Dec. 12, 2015.
Ahmed Yosri—EPA
By Ian Bremmer

2015 was a challenging year for Saudi Arabia. World powers, led by the country’s ostensible ally the United States, struck a nuclear deal that is set to rejuvenate Saudi’s rival Iran. Wars in Syria and Yemen continued to destabilize the region. And the price of oil continued to fall. But it’s not all bad news. Elections this past weekend saw women fully participate for the first time in modern Saudi histor. These five facts offer a snapshot of the Saudi kingdom’s troubled trajectory as we head into 2016.

The Saudis desperately want to see the ouster of Bashar Assad—who is aligned with their archrival, Iran—but they won’t commit ground troops to the fight. The roughly 2,500 Saudis who have left to join ISI are also giving Riyadh cause for concern. For the time being, though, Saudis have decided to support the Syrian war effort from afar. The world’s No. 1 importer of weapons and defensive systems—the kingdom spent $6.5 billion on defense purchases last year alone—has sent 500 U.S.-made TOW antitank missiles to the Free Syrian Army, one of the main anti-Assad rebel groups. It has also agreed to host a U.S.-run training facility for the Syrian rebels, where the Pentagon expects to train 5,000 Syrian fighters in its first year of operation. That’s enough to claim a seat at the table, but not enough to change the game.

Read More: These 5 Facts Explain Why Venezuela Is in Big Trouble—Still

Given how poorly the Saudi intervention in Yemen is going, it may be wise for Riyadh to sit Syria out. Houthi rebels—another Iranian ally of sorts—have taken control of the Yemeni capital, which is unacceptable to Riyadh. Saudi Arabia currently leads a 10-state Arab coalition in Yemen, and has pledged to use 100 warplanes and 150,000 soldiers to defeat the rebel group. The result so far? Some 21 million Yemenis, 80 percent of the population, now depend on humanitarian assistance to survive.

The world’s fourth-highest military spender must not have expected its operations in Yemen to go so poorly. But Saudi Arabia, like the U.S., is learning the hard way that clear military superiority doesn’t translate easily into military victory in today’s Middle East.

But it is Iran’s return to world oil markets that may pose the biggest threat to Saudi influence. Tehran is expected to bring an additional 1.5 million barrels of oil a day back to the market by the end of 2016. The world is already facing an oil supply glut as the Saudi-influenced OPEC—which controls one-third of global oil—continues to maintain oil production in an attempt to price out competitors from the market, especially shale oil in North America. That’s a big reason why oil has plummeted from $111 a barrel in June 2014 to under $40 dollars this week. And it seems to be working; the number of shale rigs drilling for oil in the U.S. has been more than halved since last year.

But preserving its market share has come at great cost to Saudi Arabia, both financially and politically. Oil accounts for 80 percent of the Saudi government’s budget revenues, 90 percent of its export earnings, and 45 percent of its overall GDP. With a $640 billion reserve cushion, though, Riyadh can play the long game; other OPEC members like Venezuela and Algeria don’t have the same luxury. The International Energy Agency estimates that the oil crash has so far cost OPEC countries $500 billion a year. Members are already bickering. Expect tensions to rise higher as the price of oil falls lower.

Read More: Marine Le Pen Lost a Battle But May Win the War in France

4. Succession and the Deputy Crown Prince

The biggest story in Saudi domestic politics this year was the appointment of 30-year old Mohammad bin Salman to the critical role of defense minister and deputy crown prince, making him second in line to the throne. It’s the first time in modern Saudi history that power has been concentrated in a single branch of the royal family, who number more than 15,000 overall. Salman’s youth has also raised eyebrows as age has always been a “preeminent qualification” in determining who ascends to the throne, according to Saudi scholar Simon Henderson.

This major shake-up in the Saudi power structure has left many royals resentful. The current crown prince, 55-year old Mohammed bin Nayef, is a darling of Western governments for spearheading the Saudis’ fight against Middle East terrorism. But Salman has been aggressive in reshuffling leadership positions in the government to shore up his own power base. 2016 is shaping up to be a big year for internal Saudi power struggles, at a time when the region can least afford them.

(The Guardian, The Economist)

Now for a rare bit of good news. Last weekend’s municipal council elections were the first time women were allowed to both vote and run in Saudi elections. Of the 7,000 candidates, 979 of them were women; 20 women ended up winning seats. That means of the roughly 2,100 municipal council seats that were contested, less than 1 percent went to women. Not exactly a sea change, but for the only country in the world where women are prohibited from driving, it’s progress. And Saudi women continue to make strides. In 2004, only 23,000 women were in the country’s workforce. Today, more than 400,000 Saudi women are gainfully employed. Baby steps, but at least they’re headed in the right direction.

Saudi Arabia’s future is more clouded than most. But one thing is certain; the Saudi kingdom will be glad to see 2015 go. 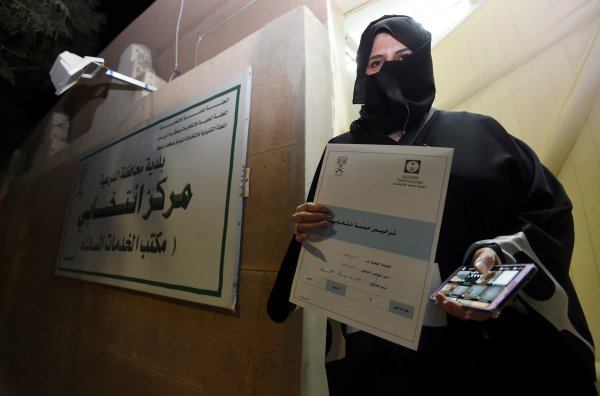 Hundreds of Saudi Women Run for Office
Next Up: Editor's Pick