It made some sense to the national news media that casino mogul Sheldon Adelson would be the shadowy, now-unmasked new owner of Nevada’s largest newspaper. The Silver State is key in the presidential nominating process and one of a handful of states that are seen as winnable by either party in November, and Adelson is a billionaire for whom a $140 million purchase is mere change under the couch cushions.

For those of us who have worked for the Review-Journal or lived in and covered Las Vegas—I’m a veteran of both—it took more time to digest because, upon closer examination, it accomplishes so little for him. The R-J has always been staunch conservative and already generally agrees with almost everything Adelson believes: Obama is bad for America, unions are destructive, and the U.S. needs to do everything Israel needs. Why buy the cow when you get the GOP-flavored milk for free?

The only way to actually understand this bizarre development is as yet another data point in Adelson’s decades-long track record as perhaps the most inept, clueless and ineffective political player in America. This is the truth that Vegas pundits who exploit the national press’ fascination for their own gains never bother to acknowledge: Adelson is colorful but utterly irrelevant. He’s not now nor has he ever been the central actor in some brilliant political conspiracy.

As a political reporter for the Review-Journal in the late 1990s, when Adelson was just emerging as a Vegas titan with the 1999 opening of the Venetian, I covered his earliest terrible political investments. He plunged $2 million to defeat three pro-labor Clark County Commission candidates amid his battles with the Culinary Union, and each won in landslides anyway. Adelson also made every effort to undermine the campaign of Shelley Berkley, one of his former corporate lawyers with whom he had a falling out, but she won and stayed in Congress for 14 years.

Even his successes crumble to ash and show his lousy judgment. He spent big to get Lance Malone elected to the County Commission in 1996. Malone lasted one term, lost re-election in 2000 and went on to be the bagman on behalf of Vegas strip club bosses in a multi-state bribery scandal that earned him five years in the federal pen. And in 2006, he took some credit for the election of Gov. Jim Gibbons, a man who quickly became so unpopular that he set records for having his vetoes overridden and in 2010 was the first Nevada governor to fail to get his own party’s nomination for re-election. Those are his wins.

The D.C. media became fascinated with Adelson when he blew $15 million on a quixotic effort by former House Speaker Newt Gingrich to be the GOP presidential nominee in 2012. He also poured $150 million into the efforts by Republicans to re-take the White House and Senate in 2012, an election in which the only swing-state Republican to win was now-Sen. Dean Heller of Nevada. That must’ve been personally satisfying for Adelson because Heller ended Berkley’s political career, but Berkley got into ethics trouble and ran what she later admitted was a lousy campaign. But, OK, he won that one and can take responsibility for one senator. Congrats.

Adelson’s impotence was on display just last week in a House hearing on the Restoration of America’s Wire Act. The casino mogul is a full-throated opponent of legal online gambling, which was unleashed when the Obama Justice Department reinterpreted the Wire Act to allow for it in 2011. Don’t ask why Adelson is so upset by this; he says he’s concerned about underage gambling and addiction, but his Venetian and Palazzo in Las Vegas were the first resorts on the Strip to allow visitors to play on mobile gaming devices in many relatively private corners of his vast properties. His resort, thus, were one of the easiest places for underage people to actually gamble out of the view of security on their parents or of-age friends’ accounts.

Regardless, Adelson has worked with Rep. Jason Chaffetz (R-Utah) to get the Restoration of America’s Wire Act passed. The lack of traction for this priority, then, was evident when Chaffetz held a House hearing last week on the bill entitled “A Casino in Every Smartphone: Law Enforcement Implications.” The session turned into an opportunity for members of both parties to speak out against it as a violation of that traditional GOP chestnut, states’ rights.

Adelson’s political decisions and spending are personal and haphazard. Unlike the Koch brothers, who patiently spent decades laying the intellectual foundation for a conservative movement that supports unglamorous but vital offices like school boards and state legislatures, Adelson plops huge, fiscally irresponsible expenditures and projects little in the way of a coherent philosophy.

His sole effort of that sort is a program called Birthright, which provides free vacations in Israel for young American Jews. It is meant to encourage Jews to learn about their faith. Adelson of course hopes his investment not only encourages a love of Israel but a new generation of voters that might give a friendlier ear to the politicians he supports, too. And after $160 million and thousands of junketeers, there’s no evidence Birthright has encouraged Jews of any age to defect from their overwhelming and traditional support for Democrats.

All of this is prologue to Adelson’s R-J purchase. The Washington Post referred to it Thursday as a “politically important” newspaper, which is quite silly. The paper’s editorial positions are repeatedly refuted by its readership. Thanks largely to the faulty leadership of its former publisher, himself a longtime activist right-winger who openly used the paper’s prominence in a failed effort to unseat Sen. Harry Reid in 2010, the paper’s circulation failed to capitalize on the city’s two decades of unprecedented population growth. The R-J has one of the lowest levels of readership penetration of any major American city, so its editorial views have precious little impact.

Adelson is no Jeff Bezos or Mike Bloomberg. He’s not someone who has ever suggested he has interesting views about the future of the media that he hopes to use the R-J to incubate. And he knows he is a lightning rod whose personal involvement undermines any hope of credibility the R-J has in political coverage, which is probably why he tried so hard to hide.

This purchase should be the moment that the rest of the political world realizes just how misguided Adelson’s decisions are. Yes, he’s got an insane bankroll and, thus, can’t really be ignored. When Republican hopefuls visit Vegas to kiss his ring, it is a spectacle of obsequiousness and humiliation that does tell us something about the candidates, to be sure.

But this move is fascinating for its typical lack of forethought by Adelson. He now owns a small paper that already agreed with him, but it’s now no longer a separate voice echoing him but his own voice. The minute he actively manages its political or gaming coverage, he undermines his investment by destroying the thing that gives a local news outlet its value, its credibility. If anything, he’s just given the reporters there much more incentive to prove to readers they’re not working in the service of his ideology.

Nothing about this furthers his goals. In that, however, it is a positively Adelsonian act. 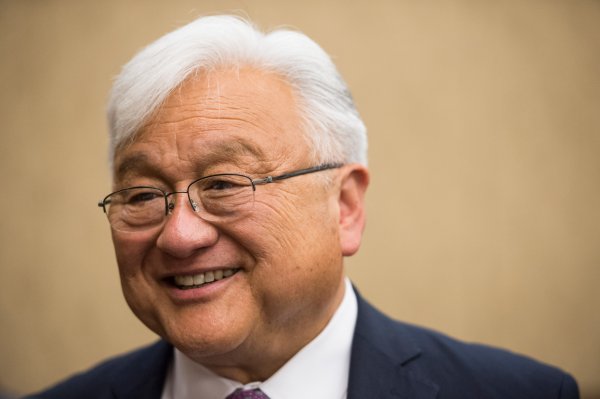 What My Time in a Japanese Internment Camp Taught Me About Hate
Next Up: Editor's Pick