What You Don't Know About the Abortion Fight Before Roe v. Wade

Members of the Mountain States Women's Abortion Coalition form a picket line in front of the State Capitol in January of 1972
David Cupp—Post Archive/Getty Images
By Daniel K. Williams

On Sunday, April 16, 1972, ten thousand people gathered in New York’s Central Park to protest New York’s liberal abortion law. The Supreme Court’s decision in Roe v. Wade was still nine months away, but the battle over abortion was already raging. Yet the divisions did not fall neatly along partisan or ideological lines.

In New York, the state with the highest number of legal abortions, the polarization was especially acute. It had been a Republican legislator and Republican governor who had been chiefly responsible for the legalization of abortion in the state two years earlier, and many of New York’s Republicans—including Governor Nelson Rockefeller—were still strongly supportive of abortion rights. But it was also a Republican who was leading the charge to reverse their actions. Democrats were equally divided.

The media portrayed the pro-life movement as a Catholic cause, but by 1972, that stereotype was already outdated. In Michigan, for instance, the fight against a referendum to legalize abortion was spearheaded by three Protestants—a gynecologist, a white Presbyterian mother, and an African American woman who was a liberal Democratic state legislator. In Minnesota, the leader of the state’s pro-life campaign was a liberal Methodist whose physician husband was a member of Planned Parenthood. In Massachusetts, one of the leading pro-life activists was an African American Methodist physician who had been the first black woman to graduate from Harvard Medical School. And even in New York, where Catholics accounted for the vast majority of the movement’s activists, there was more religious diversity than the media often acknowledged, partly because Catholics had joined forces with Orthodox Jews. In fact, one of the keynote speakers at the April 16 pro-life rally in Central Park was an Orthodox Jewish rabbi who served as president of the Rabbinical Alliance of America. One of New York City’s most vocal pro-life advocates was a liberal Lutheran minister who was best known for his protests against the Vietnam War and his advocacy of civil rights.

Perhaps most surprisingly, at the time the protest took place, the pro-lifers were winning. Only a few years earlier, their campaign had looked like a last-gasp battle against the forces of progress. They faced opposition from the women’s rights movement, newspaper and television media, the medical and legal establishments, mainline Protestant denominations, ecumenical religious organizations such as the National Council of Churches, and political leaders in both major parties. Yet the pro-life movement had figured out a way to defy the international trend toward abortion legalization and defeat several efforts to liberalize state abortion laws.

The right-to-life movement had faced nearly insuperable challenges in the late 1960s, when a wave of sixteen states legalized at least some forms of abortion within a three-year period. But then the pro-lifers regrouped, changed their strategies, and figured out how to win legislative battles. In 1971, twenty-five states considered abortion legalization bills. Every one of them failed to pass. In 1972, the pro-life movement went on the offensive and began campaigning for measures to rescind recently passed abortion legalization laws and tighten existing abortion restrictions. In the wake of the Central Park protest, the New York state legislature voted to repeal New York’s liberal abortion law and was thwarted only by Governor Rockefeller’s veto.

. . .If the opponents of abortion had based their opposition merely on religious teaching or the seemingly arcane principles of natural law—as Catholics had when campaigning against contraception—it is unlikely that the pro-life cause could have withstood the forces of the sexual revolution, the feminist movement, and the social changes of the 1960s. But because the pro-life movement grounded its arguments in the language of human value and constitutional rights, it was able to attract a politically and religiously diverse coalition that actually gained strength over time. The pro-life movement succeeded because it drew on the same language of human rights, civil rights, and the value of human life that inspired the struggle for African American freedom, the feminist movement, antiwar protests, and the campaign for the rights of gays and lesbians. 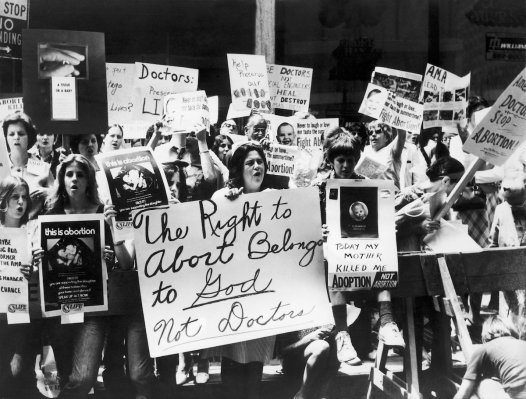 'A Stunning Approval for Abortion': Roe v. Wade Reactions
Next Up: Editor's Pick